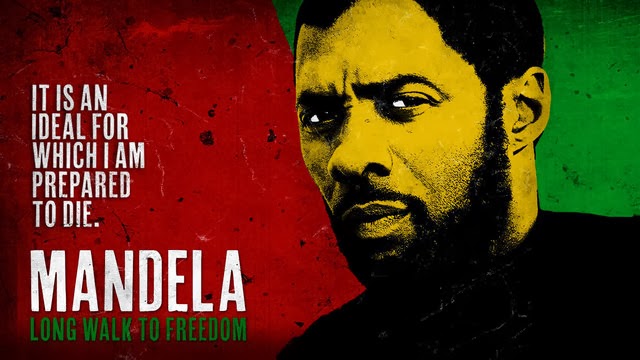 As icons go, Nelson Mandela was amongst the 20th century’s most enduring figures, a totem of international civil rights and a symbol of courage and conciliation in the face of unyielding injustice. While he has been portrayed previously on film by the likes of Morgan Freeman (Invictus), Dennis Haysbert (Goodbye Bafana) and Terrence Howard (2011’s Winnie Mandela), most relevant dramatisations have only dealt with snapshots of particular periods in his life.

The arrival of Justin Chadwick’s weighty Mandela: Long Walk to Freedom, however, signals the first large scale filmic biography of this most fascinating of men. As such it brings with it a certain level of expectation and, considering the historical significance of its subject, it just about succeeds as a serviceably virtuous biopic.

Based on Mandela’s autobiographical work of the same name, Long Walk to Freedom is especially relevant given that the former South African president died only last month, passing away on the night of the film’s UK premier. In the period since, there have been renewed examinations of the crucial role he played in pulling his country away from the brink of a racially-charged civil war and championing democracy in the former home of the internationally despised apartheid regime.

Mandela’s existence was an eventful one and there is much to pack into a film which opens with the boy his father called Rolihlahla (’troublemaker’) becoming a man on the veldt and concludes with his election to the highest office in the land. In spite of a hefty running time, Chadwick does not quite manage to hit all the necessary marks.

Throughout the film there are earnest nods to seminal moments in the struggle against apartheid - the Sharpeville massacre and the Soweto uprising being notable examples - yet they are undoubtedly rushed in an attempt to move on with Mandela’s own narrative. Presented as generic occurrences in South Africa’s violent past and used, apparently, as a means of contextualising the struggles of the title character, these incidents lose a great deal of their significance. They are relegated, ultimately, to mere episodes in a film which veers close to a lecture with its occasional captioning and intermittent stock footage.

This expediency is not a bad thing in itself but it tends to crowd out any deeper examination of Mandela the man. Initially at least, this is not the figure of his latter years: the benign father of Africa. He boxes, he drinks, he philanders and he readily embraces violent rebellion. The problems of his characterisation do not rest with his being a shallow figure, rather they stem from the fact that by the end his motivations and the things that made him tick remain unclear.

That Madiba was, in many ways, a blank canvas onto which the world would colour its hopes for truth and justice is surely beyond doubt. Even he found it politically advantageous to cast his own individuality as unimportant in the wider struggle for democracy. Present in almost every scene, and painted in darker shades than one might expect, he is nevertheless a complex character under whose exterior the audience is never really allowed to explore. Idris Elba’s central performance then is remarkable when viewed through the prism of these complexities.

Since his outstanding turn as the clinical businessman-gangster Stringer Bell on The Wire, Elba has carved a niche as a reliably excellent performer in film and television. Long Walk to Freedom represents his first true lead feature role and he grasps it with both hands. It is no simple impersonation. Elba’s intense physical presence and obvious confidence combine to render him a believable character.

Elba infuses his portrayal with humanity, embracing Mandela’s failings as father and husband without ever compromising the audience’s sympathies. A wily politician with a flair for large gestures, Mandela’s clever manoeuvring is nicely juxtaposed with the saintly figure he would later become. Whether it is the securing of long trousers for his prison comrades or outwitting white negotiators unable to countenance ‘a crude one man, one vote system’, Elba revels in these earthier moments. The lack of depth holding the film back should not be ascribed to a leading actor who excels when given the opportunity to go beyond the crusading persona. Indeed, there is genuine heart break at failing his parents’ simple expectations and, when faced with the death of a child, the confines of his island prison come close to breaking his spirit.

Elba’s shadow is a large one and such is the quality of his work here that the rest of the cast is essentially forgotten. As Winnie Mandela, however, Noamie Harris provides a perfect foil to Elba’s more considered approach. Her character is given room to breath and while the steely core that would define her is present from the start, she undergoes a remarkably convincing transformation from pretty activist to militant political wife. Hers is a forceful representation of a fiercely independent spirit and a brilliantly layered portrait of a woman whose hatred of the system and commitment to the cause brought her not glory but sadness and solitude.

On the back of its impressive principals, Long Walk to Freedom overcomes its episodic nature and pedestrian pace. Whatever the flaws, this is, at times, an absorbing study of an era best consigned to the history of human indignities. That said, one hopes that this is not the last time that Madiba will grace our screens, large or small. The weight of his legacy and the breadth of his story is deserving of further and truly profound attention.

Mandela: Long Walk to Freedom is on general release now.

An edited version of this article was first published here.
Posted by Matthew Coyle at 17:26