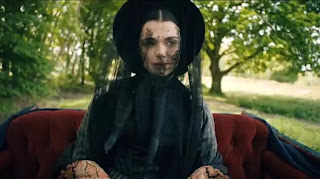 Daphne du Maurier’s bleak novel, My Cousin Rachel, receives only its second cinematic adaptation since its 1951 publication, this 2017 retread serving as a long overdue update of a particularly enigmatic work.

Set in the environs of coastal Cornwall, this centres not on its title character (Rachel Weisz) but on Sam Claflin's Philip Ashley, vigorous young master of a stately manor and orphaned ward of his beloved cousin, Ambrose (also Claflin).

When Ambrose dies during his convalescence in Florence, his widow, Rachel, ends up at Philip's door, beautiful, ghostly and entirely inscrutable. Given that in the cousins' correspondence Ambrose cast doubts on Rachel's intentions towards him, Philip is convinced that she hastened his death, a stance that soon softens when the grieving wife bewitches him.

The question of whether or not Rachel is a murderess – "Did she? Didn't she?" – comes and goes with Philip's mood, initially smitten, then possessive and, finally, again, suspicious. It drives the narrative, never far from the surface, Rachel's unknowable motivations always seeming to sit awkwardly with Philip's fumbling, entitled attempts to secure domestic bliss.

At the core of the tale, Weisz inhabits her role with aplomb. Undoubtedly the most complex character on show, Rachel's primary countenance is one of refinement. She is delicate and grounded, funny and undemanding, yet Weisz manages to convey an instability beneath it all, a sense of oddball unpredictability. Her endgame constitutes an ambiguous strand and it is to the credit of both Michell and his leading lady that this should feel so unsettling. As Rachel cheerily concocts continental tisanes, viewed by the locals with barely contained bafflement, hints of danger nibble at the outer edge of this story.

Claflin, on the other hand, fares less well. He carries off the haughty heir with minimal effort but misses in adding the layers necessary to compete with Weisz's enchantress. In painting Philip as the sort of breech-sporting youth unused to even the mere presence of women, Claflin comes off as smug, almost petulant. Where callowness is required, stupidity is the prevailing mood as he makes moves to sign over his fortune to a stranger.

As far as the supporting cast is concerned, proceedings are consistently garlanded by the always excellent Iain Glen. He offers refinement and loyalty as Philip's wealthy godfather-cum-guardian, at first charmed, then watchful and perturbed by the developing situation. Simon Russell Beale, meanwhile, is wonderfully restrained in the role of the family solicitor, undemonstrative but upright, whose language ("That's my job, to stickle.") delights. Holliday Grainger, too, stands out, alongside Weisz, as Philip's would-be paramour. Her calm wisdom is at odds with his puppy-like devotion to the new lodger, though, refreshingly, neither woman is pitched as a rival of the other.

If there exists a major sticking point, then it is in tone and setting. From Rebecca to the unerringly creepy Jamaica Inn, du Maurier's stories are grey and forbidding – hers is an oeuvre thick with ambience. It is puzzling, therefore, that Michell chooses to trade in those tropes for the rural idyll of Thomas Hardy. Instead of crashing waves and isolated moors, verdant pastures and forests ripe with bluebells flood the screen. Gorgeous as they are, such elements undermine the kernel of darkness so inherent to the du Maurier résumé.

More is the pity, for My Cousin Rachel is, on the surface, an accomplished picture. With a script delivering intense, occasionally earthy dialogue and no little style, Michell's film would have excelled if it had only focused on the tenets that made the source material soar.

Posted by Matthew Coyle at 14:45 No comments: 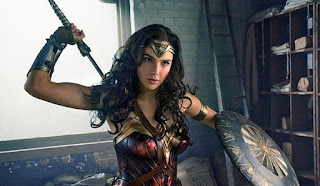 As a competing counterweight to Marvel's limitless deluge of multi-platformed superhero derring-do, comic house DC's Extended Universe (an exercise in aping its rival's targeted, overarching mythology) has not fared well since birth.

Suicide Squad was a disaster and Batman v Superman: Dawn of Justice barely felt much better. Man of Steel, released in 2013, granted Superman new life, but, for all its style and grit, audiences were uninspired by a film that descended into convention.

Interestingly, then, the latest step in the DC campaign arrives in a much more elegant form. Wonder Woman might seem like a campy antidote to the muscular glowering of all that has gone before, but, under the guidance of Monster director Patty Jenkins, this period tale occasionally succeeds where its predecessors have largely failed.

This is not Wonder Woman's first blockbuster appearance, of course. A major name in DC's stable, she appeared in Dawn of Justice and will fill out the cast of the upcoming Justice League, a riposte to the Avengers franchise – a signal that, regardless of the missteps, this is a movement in it for the long haul. By hiring a female director with indie sensibilities, however, mother studio Warner Bros has embraced a fresh approach, one that pays off more than it fails.

The set-up is vintage comic book lore. Diana (Gal Gadot) is the Amazon princess and scion of Olympus who spends her days on the mythical Themyscira, training under the watchful eye of her warrior aunt, Antiope (Robin Wright), and learning the details of her heritage at the knee of Queen of the Amazons Hippolyta (Connie Nielsen), her mother.

When an American pilot, Chris Pine's Steve Trevor, crash lands on the tropical paradise, Diana is quickly drawn into the Great War due to her belief that the Amazons' mortal enemy, bellicose god Ares, is behind the chaos.

In the central role, Gadot is a believable demi-god-cum-moral-crusader. Jenkins places much of the movie's hefty action on her shoulders, a choice that proves wise given the leading lady's charisma. As with the other denizens of the all-female Themyscira, Diana exudes power and athleticism. Such is her presence that when the impressive action beats arrive, her skill in battle comes as no surprise.

Gadot also possesses a sly funny streak. Her earnestness remains a gag throughout and the flirty interplay with Pine – reining in, though not abandoning, his engaging Captain Kirk shtick to good effect – serves as a major asset. Traditional roles are subverted by Diana being the stoic hero, Steve the smitten sidekick. Even Gadot's looks are mined for mirth, her exquisite beauty acting as a genuinely amusing object of fascination and distraction in grim wartime London.

When Diana is on screen, Wonder Woman is a satisfying, big-budget, unplug-your-brain blockbuster that recovers some of the mojo DC has lost over recent years. One central sequence sees her assault enemy lines on the Western Front, battering through hapless opponents, swatting away hails of bullets. Shot through with smoke, dirt and chaos, it is undoubtedly the film's most exhilarating set piece and as she reduces a church to smithereens, Diana is less the glamorous siren than a devastating weapon of war.

Her dialogue is unlikely to bother the Academy but Gadot enjoys enough good material to imbue her character with steel-cored belief in right and wrong. When her naive notions about the nature of man start to fall away, Diana's sadness is clear. Just as welcome is her intolerance of patriarchy and the amusing fish-out-of-water experiences that fuel the early going are mostly centred on the tensions between Diana and the strictures of the era.

Wonder Woman's faults claw back a great deal of the progress, unfortunately. Those elements outside the Diana-Steve dynamic are dull at best. Two exposition-heavy sections, at the beginning and at the end, smack of laziness, even if the first is set against the backdrop of a stunningly visualised rendering of the Amazons' mythological roots. Danny Huston, meanwhile, careens around as a devilish German general trapped in the wrong conflict and hopped up on vials of blue magic. His dastardly plans have something to do with poisoned gas and his accomplice, Doctor Maru (Elena Anaya), is little more than a cartoon goblin.

A band of supporting players, including Ewen Bremner as a shot-shy Scottish sniper, verge on irritating, the weak attempts at backstories ringing very hollow indeed. Just as trying is the rubbery CGI-enhanced slo-mo that Jenkins insists on deploying every time fisticuffs are called for. Initially striking, the method is still flying around the screen by the time the bombastic finale arrives. That ending, ripped straight from almost every superhero chronicle of the last decade, feels generic, in spite of the moments of intimate emotional resonance poking through.

That said, there exists sufficient quality here to save this latest DC offering from ignominy. Themes of female empowerment abound, of course, but they are as genuine as they are timely, more than a mere nod to the liberal-minded. Comic book adaptations lost their freshness many years ago, but Jenkins has made a sound fist of forging something new.

Posted by Matthew Coyle at 14:02 No comments: