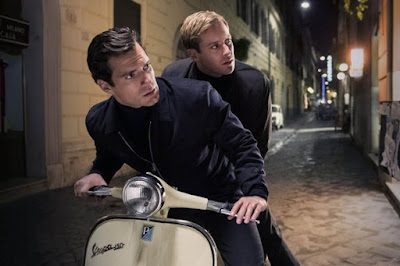 
When Guy Ritchie first announced himself to the movie-going public in 1998, he did so at the helm of Lock, Stock and Two Smoking Barrels, a leering, grimy crime caper oozing with mischief and an innate sense of bobbing Cockney swagger. Part winking homage to the gangster genre’s lower end, part caustic comedy, Ritchie’s debut was an instant classic, its template refined  – though still in place – for 2000’s Snatch.

The latter might have attracted Brad Pitt to become part of an ensemble cast, but it promptly hid him behind bad dentures and an impenetrable Irish traveller argot. These were films working to Ritchie’s own rules, their cheekiness unchecked by the desires of the mass market.

Some subsequent missteps (Swept Away, Revolver) aside, the director’s talent was obvious. His two-film update of the Sherlock Holmes mythology carried more polish, a big-budget sheen and charismatic leads in Robert Downey, Jr. and Jude Law, but there was discernible grit there also, from its steampunk noir to the title character’s only slightly amusing psychological fragility.

Four years on from when Holmes and Watson last bickered and brawled their way through A Game of Shadows, Ritchie finally returns with The Man from U.N.C.L.E.. While a feature update of the kitsch sixties television series is hardly something for which the public was pining, this feels far from a film without spirit or significance.

As sweet as a bag of candy floss, and just as substantial, U.N.C.L.E. is a terrifically entertaining spy romp which positively embraces its irreverent, eyebrow-cocking approach. This relatively low-key entry into the din of the summer movie market will attract less business than its bruising competitors, but the stage is set for a new franchise trading on the modern fondness for the Don Draper age.

The plot here is an unpretentious mix of sub-Bond globetrotting and Mission: Impossible’s derring-do. Enemy agents Napoleon Solo (Henry Cavill) and Illya Kuryakin (Armie Hammer) are thrown together, across the Iron Curtain, to trace a missing nuclear scientist and prevent a worldwide apocalypse – courtesy of Elizabeth Debicki’s neo-fascist princess, Victoria Vinciguerra – in the process.

Sitting on the right side of satire, the mood is relatively breezy, the slick action sequences wielding a sense of frivolity that the director does well to keep in check. Mercifully, Ritchie has not forgotten how to strut and however shallow U.N.C.L.E. proves to be, it does not lack for stylish execution.

As before, his strongest gambit is a masculine double header and the movie purrs when both Cavill and Hammer are sparking off each other, their mix of antagonism and scolding disapproval covering the same ground made so fertile by Holmes and Watson’s familiar partnership.

As Cold War spies, this preposterously handsome duo are natural adversaries, yet they produce chemistry from their mismatch, Solo’s wry charm offset by Kuryakin’s stiffer Russian formality. That said, both switch characteristics with enough frequency that they move beyond stereotypes. The American, for all the sharpness of his charisma, exhibits a cold commitment to the mission, driven on by a backstory at odds with his polite personae and sartorial elegance. Equally, his KGB counterpart is smoother than initial impressions suggest.

Cavill’s confidence, in particular, represents a refreshing reminder of gifts tamped down by the chiselled-jaw heroism required to animate Superman. In fact, Solo has a faintly unsettling quality that Cavill is quick to manipulate, all passive aggression and latent danger.

Beside him, Hammer goes some way to expunging The Lone Ranger from the collective memory with a layered performance that demands he be more than the straight man. Kuryakin, plagued by personal baggage, comes with a suppressed predisposition to violence that is only ever hinted at, yet Hammer – carrying, as he always does, the expression of someone who thinks before he speaks – paints him as something other than a blunt tool. Indeed, his interaction with the heroine of the piece, Gaby Teller (Alicia Vikander), skirts the edges of lust and attraction, playing off her stubbornness and his ordered sense of duty.

Portraying the daughter of the aforementioned scientist, Vikander is unmissable. From Anna Karenina to Ex Machina, via A Royal Affair and A Testament of Youth, the Swedish actress has, until now, excelled in roles demanding furrowed brows and more than a dollop of sadness.

Ritchie allows her to cut loose here. As exquisite as ever, Vikander nevertheless gets to dance like an idiot, drink like a fish, trash a hotel room and scowl at female fashions, embracing the innuendo-heavy dialogue along the way. She also manages to pull off the prettiest hangover ever committed to the screen. Disdainful of the testosterone flowing around her, Gaby channels the cynical viewer who asks if all this silliness is really necessary.

Once the finely tailored villains prance into view, however, that quandary does loom rather large over U.N.C.L.E.’s latter half. Debicki serves as an effective ice maiden, but the reasons for her need to possess and distribute world-ending technology are never explored. Maybe she’s a disaffected Nazi, maybe she’s just a really horrible person; either way, the truth stays hidden.

Given that so much effort – including a thrilling final ten minutes – goes into foiling whatever plan she has hatched, it is a serious failing that so little attention is afforded to this strand of an otherwise straightforward narrative.

Hope for some clarity arrives in the form of a sarcastic Hugh Grant (is there any other kind of Hugh Grant?), whose natty British naval spook spits out handy exposition to garnish his arsenal of light barbs. Unfortunately, even he seems unaware of what’s going on, concentrating instead on securing Her Majesty’s interests with a dash of his own machinations.

This would be hobbling if the rest of the film wasn’t such fun. In judging his tone so keenly, Ritchie has crafted a glossy franchise starter with foundations solid enough for any sequel to build upon. With the U.N.C.L.E. moniker finally introduced before the end, this is a spy ring worthy of at least one more mission.
Posted by Matthew Coyle at 15:13 1 comment: