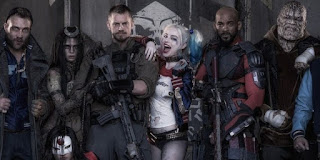 It is easy to get lost these days in the seemingly endless maze of comic book adaptations flying and exploding across multiplex screens on an almost monthly basis. The Marvel stable, via various studios, has brought us the X-Men, Spider-Man and the cacophonous onslaught of the Avengers, with all those intersecting strands of expensive CGI and Robert Downey Jr.

Competitor DC, meanwhile, has taken a while to match that level of output, though the fact that this current generation of cinematic superheroes was ushered in thanks to Christopher Nolan’s peerless Dark Knight trilogy surely means that DC, rather than Marvel, has set the bar.

What the former is only now starting to attempt to emulate, however, is the kind of overarching genre that the latter now wields as a matter of course across multiple platforms (film, television, Netflix). Zack Snyder’s crushingly underwhelming Batman v Superman: Dawn of Justice was meant to be the first step in such an approach (the upcoming Justice League is the next stage). It brought together a grizzled Batman — Ben Affleck instead of Nolan muse Christian Bale — and Henry Cavill’s Superman, fresh off his impressive turn in Snyder’s Man of Steel, an accomplished, if somewhat glowering spin on the tale. Regardless of its reception, the stage was set for something larger to take shape.

Curiously, the next instalment in DC’s grand project comes hurtling out of left field. The crux of Suicide Squad is that it deploys a coterie of the publishing house’s worst villains as a rapid response team aimed at tackling terrible situations with the most terrible human beings alive, a make-believe equivalent of tasking Hitler, Stalin, Pol Pot and Donald Trump with the job of fixing climate change, or Brexit.

Given its delicious premise, cool cast and obvious pedigree, the anticipation for a filmic portrayal of one of the more niche strands of the DC universe has reached boiling point. Director David Ayer’s record in churning out muscular, hard-edged crime thrillers (End of Watch, Street Kings, Harsh Times; he also wrote Training Day) tipped Suicide Squad over the top as a promising and gloriously nasty blockbuster, worthy of the public’s attention.

It should come as a disappointment, then, that hope and reality diverge in so dramatic a fashion. Ayer’s film is, to put it politely, a mess, plagued by tonal inconsistencies and a plot that seems (amazingly) barely comprehensible. There also runs through it a whiff of smugness, one born of all involved believing their work to be far cleverer and much more subversive than it actually is.

This was a production that underwent significant reshoots and while this in itself is hardly an indictment, Suicide Squad appears thrown together. From the intense period of exposition that opens proceedings — characters’ backgrounds and aliases fly from the lips of shadowy, string-pulling bureaucrat Amanda Waller (Viola Davis) — to the bouts of action and characterisation that sit so unevenly in concert, this is not a picture displaying a great deal of fluidity.

There exists an episodic nature here that serves only to erode any connection one might have with the material, for there is only so often that specific sarcastic moments can be juxtaposed with specific emotional moments before one’s patience wears thin. Early scenes involving Affleck’s taciturn vigilante may contribute to the crucial wider context but they smack of tokenism at best and feel ill conceived at worst — Batman’s encounter with Deadshot (Will Smith) must surely represent the least exciting thing Bruce Wayne has ever done.

As for the overarching peril against which the team must do battle, its lurch towards the supernatural is as preposterous as it is senseless. While the onset of this threat signifies karmic retribution for Waller’s own machinations, the whole episode is handled so clumsily (how, exactly, is Jai Courtney’s lager-swilling Australian stereotype, Captain Boomerang, one of the few people alive suitable for tackling an ancient inter-dimensional despot?) that any spectacle is soon lost beneath the weight of rampant silliness.

What positives there are stem from a line-up that is otherwise wasted. Smith, as ever, marries swagger, arrogance and heroism while mostly retaining his dignity, Deadshot’s status as an amoral killer rather than outright lunatic acting as a counterbalance in a milieu where almost everyone is utterly bonkers.

Margot Robbie, too, emerges with reputation intact. Her Harley Quinn is complex enough to be curious; Robbie, so often cast as gorgeous prop, conveys both Quinn's vulnerability and fondness for savagery.

Unfortunately, Jared Leto fares less well in playing the Joker, Quinn’s paramour and the yin to her yang. Leto has proved himself an exceptional performer in recent years, yet his presence here, as anarchic and unsettling as it is, fulfils no discernible role, neither antihero nor antagonist. One of popular culture’s great miscreants, he is instead relegated to secondary status, the pursuit of Quinn, his muse, standing as his sole raison d’etre. Never has so arch a villain been so underused.

Elsewhere, Joel Kinnaman — an actor capable of a great deal — looks vaguely embarrassed by the naffness of Rick Flag, a dour crusader plagued by personal travails and a fraying code of conduct. Neither is interesting.

Ultimately, as with those Marvel counterparts, Suicide Squad descends into a miasma of overblown effects. Its deliberately bleak attitude is quickly forgotten in the din as characters once described as the “worst of the worst” embrace their inner angels. A message about the innate goodness of humanity underlays it all, perhaps, though the result is so inept as to render any moralising irrelevant.


A sly finale may attempt to claw back the ground but the damage, by that point, is long sustained. Boring and without even a sliver of inspiration, this is one issue undeserving of a plastic cover.
Posted by Matthew Coyle at 18:13 No comments: