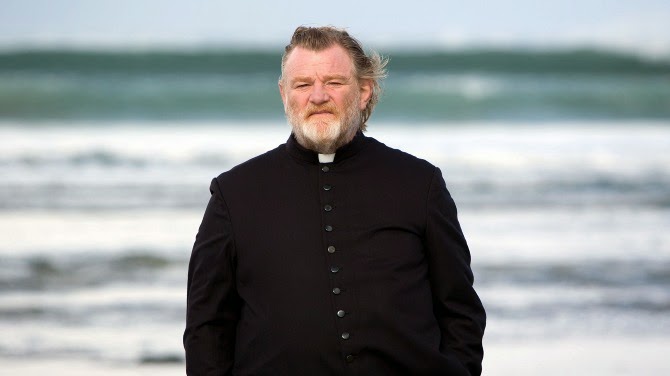 He has only occupied the helm of two films thus far in his career but Irish auteur John Michael McDonagh may already have established something of a cinematic brand: acerbic, darkly comic, bleak.

His debut, 2011’s The Guard, was a hilarious, strangely affable tale of an unpredictable — though brilliant — country policeman in the wilds of Connemara. Brutally honest and surprisingly sweet, its towering leading man, Brendan Gleeson, was almost outdone by the empty, spectacularly desolate backdrop of the Galway scrub. The presence of the ever excellent Don Cheadle, dropped into a locale so completely beyond his normal range, made it all the more endearing.

By placing Calvary, his sophomore effort, once more in Ireland’s windswept western reaches, McDonagh leans again on the expressiveness of such a startlingly glorious place, all cloudy greens and blanched, salty blues. Similar in look, if not tone, to his first feature, the director’s fondness for the beautiful gloominess of these landscapes takes him north to Sligo and a sleepy, unnamed town.

What is depicted there contrasts starkly with the snide cheeriness of The Guard. Set against sweeping hills and verdant fields, Gleeson’s James Lavelle is a morose but well-intentioned priest ministering to the mildly grotesque laity of a parish existing in the cold shadow of the mighty Benbulben. There is comedy here, of course, but a pitch black chord strangles any jollity. The humour is not cruel but nor is it uplifting.

The overarching theme throughout is of deep and barely contained anger. Sure, the setting is ripped straight from a picture book of twee Irish vistas but this is undoubtedly a country in which the Celtic Tiger’s carcass is beginning to smell. Indeed, that rage regularly threatens to consume the weary bonhomie. It is directed at the banks, repossessing all around them as their former foot soldiers — best personified by Dylan Moran’s ostensibly awful financier — grow fat from their ill-gotten spoils. The state, too, is a target of this bubbling resentment but, above all else, it is the church which sits at the centre of the disquiet.

Institutional abuse and organisational avarice fuel the flames, flames which will eventually, casually, consume Lavelle’s humble chapel in an obvious act of arson. One of a number of shocking developments, it suggests, at that moment, in glowingly paganistic terms, that isolated, rural Ireland is no longer the pulsing heartland of church influence and dogma.

In this confrontational atmosphere, Gleeson’s taciturn cleric is faced with a startling opening line and a chilling warning from one unseen, abuse-surviving confessor. Killing a bad priest would mean nothing to the public, goes the parishioner’s logic, but murdering a good one, on a Sunday, would certainly grab the world’s attention. He is to be the sacrificial lamb.

Given a week to put his affairs in order, Lavelle accepts his lot with noble resignation, neither sure of the threat’s veracity, nor, it seems, especially distressed by it. Over the course of the next seven days he attempts to bring about some measure of absolution, both to himself and his flock, yet his limited pastoral success indicates the diminished stature of Catholicism within modern Irish society. Lavelle’s presence is an irritation to many in his community, inevitable but wholly without use. People attend Mass out of habit but they pay little heed to the man in the cassock; some even seem to hate him.

This is a pity, for Lavelle is a good man of genuine faith. The peerless Gleeson has once again fashioned an avuncular and hugely likeable figure. The actor, fast becoming the cinematic muse in a creative partnership with his director, imbues Lavelle with a dry wit and, in contrast to his limp curate, Father Leary (David Wilmot), an innate sense of ordinary decency. In one scene, Moran — a Ross O’Carroll-Kelly of the Sligo coast if you will — produces his chequebook to make a donation to the parish. Leary slithers into position like some grateful donee of old but Lavelle, the populist, coldly, and honestly, drives up the figure, knowing all too well the greedy depths of the other man’s pockets.

Beyond Moran and Wilmot, the cast is just as impressive. Chris O’Dowd ratchets up the creepy factor as a faux genial butcher-cuckold, unworried by his leering wife’s adultery. Aiden Gillen turns in his usual schtick: whispery, rude, quietly hateful. His black-hearted doctor is perhaps the film’s most disturbing presence, an abrasively cruel Beckettian observer seeking little beyond his own instant gratification.

Obversely, Kelly Reilly serves a different purpose as Lavelle’s fragile, self-scarred daughter, the residue of a life before his vocation, a time marked by alcohol and violence. Even with her own demons, spawned, perhaps, by her father’s path, she represents something real, normal and, worst of all, certain to depart.

Such melancholy persists until the closing credits as the destructive power of corrupted innocence strikes a note of true sadness. The Guard was coming, undeniably, from a place of broad comedy, albeit in varying shades of darkness. Calvary, on the other hand, takes aim at something more visceral, namely the ailing spiritual wellbeing of a nation struggling to reconcile religion and fact.

Fascinatingly brave, McDonagh’s commentary is likely to affect some more than others. The fury lying beneath, however, is tangible and real enough to taste, no matter the name or face of one’s God.

An edited version of this article was first published here.
Posted by Matthew Coyle at 14:06 No comments:

Luis Suarez: the only option.

My new article over on opinionfootball.com

PFA Player of the Year: The only option

'Suarez is that rarest of beasts. Rising from the same ground as Lionel Messi, Cristiano Ronaldo or Zlatan Ibrahimovic, he is an artist blessed not only with the game’s most prized ability, but with the prodigious gifts to exist above and beyond the rest of an already gilded plane.'

Check it out here.
Posted by Matthew Coyle at 12:47 No comments: