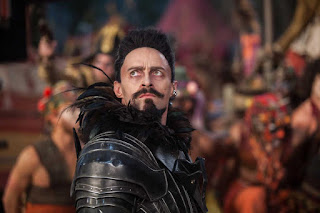 If only the most beloved stories are truly worthy of constant remodelling, then J.M. Barrie’s Peter Pan must be regarded with particular fondness.

Since the 1920s, Barrie’s seminal work of fiction — first play, then novel — has been adapted for the silver screen on no less than six occasions, with both animated and live-action versions bringing to fresh generations his elegant fable of lost boys, faraway lands and high adventure.

As with any longstanding tale, Pan’s recent cinematic appearances represent something of a mixed bag. In 1991, Steven Spielberg gave the character (portrayed with a typical sense of fun by the late, great Robin Williams) stubble, a family and, worst of all, adult cares, in the bloated Hook. Laying its focus on Pan’s eponymous adversary (Dustin Hoffman), it was a film that did not lack for heart, though its saccharine execution offended the elegant Edwardian restraint that is as much a part of the story as the ability to fly or the sound of ticking clocks.

Twelve years later, Australian director P.J. Hogan returned the narrative to its roots with the aptly titled Peter Pan, his underwhelming but faithfully realised movie succeeding in capturing the earthy source material. That it was forced to compete directly with the third entry in The Lord of the Rings trilogy seemed a cruel contrast between Tolkien’s thunderous epic and the humbler fantasies crafted by Barrie.

Perhaps with these outings in mind, director Joe Wright’s take on the origins of the Boy Who Wouldn’t Grow Up charts a course previously unexplored. The result, Pan, is as energetic and irreverent as its protagonist, girded by a sense of scale that will fulfil many a blockbuster requirement. Wright has long defined himself with a keen visual style across multiple genres; yet, what he has created here feels fantastical, a cornucopia of sleek CGI and innovation in the medium.

While a plot that sags, alarmingly, in the middle third might otherwise hobble the picture, such is the breadth of Pan’s ambition that the optical delights drag this through its occasionally turgid narrative.

Wright has much to utilise in the opening act, as infant Peter is deposited on the steps of the nunnery by his mother (Amanda Seyfried), whose parting gift is the pan pipe pendant so crucial to future events. Fast-forward a decade or so and Peter (Australian youngster Levi Miller) is a precocious tyke living in the twin shadows of the Blitz and convent superior Mother Barnabas, the latter as frightening as the former. Ignorant of his heritage, Peter is soon whisked away to Neverland by pirates seeking to fill the mines overseen by Hugh Jackman’s Blackbeard, a man with his eyes fixed firmly on defeating Tiger Lily (Rooney Mara) and her band of natives, guardians of an unlimited supply of magical, age-defeating fairy minerals.

In pulling this altogether, the director revels in a series of magnificent set pieces. From a buccaneers-versus-Spitfire dogfight over wartime London to the vast canyon of Blackbeard’s quarries — a mashup of Mad Max and Download, populated by a sea of slave children chanting, for no apparent reason, an especially anarchic version of ‘Smells Like Teen Spirit’ — Pan compels, initially at least.

This may comes as no surprise, but the film’s strongest moments arrive when Jackman is front and centre. His Tudor-era tyrant does more than simply preen. Blackbeard is a layered, fascinating and unsettling fiend, well ensconced in his own madness; broken by his past deeds, he greedily seeks the means to live forever.

It is unfortunate, then, that Jackman is relegated to the role of pantomime villain, his own backstory abandoned right around the time Wright appears to lose his way. In one fell and hasty swoop, friendships are built, tested and mended, unlikely romances fostered and prophecies fulfilled. Before long, the end is in sight.

Worst of all, the clumsy manner in which Pan shifts from something original to an expensive junior caper serves only to erode the aura of its central figure. Peter has always been a semi-ethereal entity, childlike and human, of course, but moulded by experiences apart from our own; he represents childhood as it aspires to endure.

While Miller’s performance is hardly likely to ruin the illusion, to see Pan depicted as a social product of this world, rather than another, is to suffer regret, like seeing the boring truth behind the illusion. Instead of themes so subtly laid out by Barrie — parental abandonment, youth in revolt, the wonderful capabilities of unfettered imagination — Wright ultimately plumps for spectacle over spirit.

As for the other lead roles, Mara once again imbues herself with the alluring grace that always renders her so fascinating an actress. Indeed, Tiger Lily deserves much more than feebly succumbing to the charms of James Hook (Garrett Hedlund), the film’s weakest element. He, too, is set up to be viewed in a different light, away from the increasingly cartoonish scoundrel of his earlier iterations. However, aside from the occasional wink and nod, there is no thread to guide his eventual evolution from loyal companion to arch menace. Normally a sturdy performer, Hedlund is left with little to do other than gurn his way through an undercooked character arc that merely requires him to speak in an irritating voice and exude an air floating somewhere between rakish and shifty.


Fortunately, though, Wright brings an energy to the art form that should not be ignored. For all the sogginess of its storytelling, Pan carries a frisson of excitement that will bypass only the most cynical observers. Playing on the first night of Cinemagic’s annual children's film festival — a recognition that those most susceptible to the Pan mythology are the people he most resembles — Neverland's potential to thrill is, even now, undeniable.

A version of this article was first published here.
Posted by Matthew Coyle at 18:07 No comments: