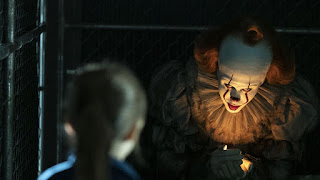 Two years on from It, Andrés Muschietti returns with a conclusion to that terrifying opener,  a chilling, dazzling and genuinely innovative take on the first half of Stephen King’s seminal tome.

It Chapter Two, striving to touch a high bar, comes complete with grander stakes and a starry cast, the Losers’ Club trading in its precocious tween crusaders for a slate of wearied adults that includes Jessica Chastain (the lead in Muschietti’s 2013 feral child chiller, Mama), James McAvoy and Bill Hader.

The results are impressive. Chapter Two is a layered, ambitious beast that will shock and unsettle in equal measures. Stripped of its predecessor’s coming-of-age stylings due to the sustained absence of the original players' infectious dynamism, it nonetheless succeeds thanks to a series of genuinely frightening set pieces – large and small – and some whip-smart, emotionally resonant, regularly hilarious writing.

Indeed, woven into the fabric is an extended and deeper understanding of the events depicted in film one, played out via extended flashbacks. The device melds the movies together as a single work, rather than two distinct entities. Chapter Two feels like a fluid and natural evolution of the story, Muschietti moulding a tale that stands as far more than a simple sequel.

The plot closely follows the route set down by the source material. Convening after the eponymous demon emerges from a 27-year hibernation, ripe with loathing for the kids who vanquished him last time out, the Losers are reunited in their native Derry, Maine, by damaged orphan Mike (Isaiah Mustafa), the only member of the gang to stay put into adulthood.

Obsessed with a vengeful It’s inevitable resurrection, he has quietly appointed himself the local monster beacon and calls on an old oath when things start going horribly awry.

Repressed trauma is the prevalent theme here. Having reassembled, each must undergo a series of trials inspired by their own fear-flecked neuroses. They burrow into their haunted and repressed memories before driving their gathered strength towards a reckoning. Painting in fairly broad strokes, the finale – nearly identical in concept to that staged in the previous film – even calls on them to descend into murky depths of their tormentor's lair.

The group interplay maintains its charm, in spite of the changing line-up. Their sweary ribbing is still funny and raucous; their mutual affection has lost none of its sincerity or warmth. They seem like the surest of friends, their bonds unruptured by the travails of life.

Their distinct personalities round out the unit. McAvoy’s Bill, now a successful author (an avatar for the cameoing King), remains plagued by the loss of his kid brother; Bev (Jessica Chastain), meanwhile, has shaken neither the shadow of her father’s clammy abuses nor her instinct for survival. Mike’s dedication has morphed into possible delusion and Ben (Jay Ryan) is now a buff architect who may have conquered his weight but not his affection for a boyhood crush.

However, it is Bill Hader, as foul-mouthed comic Richie and James Ransone, as skittish risk assessor Eddie, who come close to stealing the show. The former’s relentless sarcasm blends with the latter’s hysterical hypochondria to produce a profane and incredibly likeable double act that goes some way to lightening the prevailing horrors.

Remarkably, all capture the spirit of their younger selves – Ryan, in particular, looks stunningly similar to Jeremy Raymond Taylor's youthful, chubby version of Ben – and in Derry they revert to their assumed roles, be it leader or thinker, comic or carer. The delicate Bill soon climbs back on his childhood bicycle, zooming around town as if he were a 12-year-old in an early Amblin feature.

As before, they are harried by It and, as before, It can occupy forms and conjure scenarios closely linked to the Losers' various anxieties: a one-eyed, disease-ridden leper; a witch-like old woman; a long-murdered sibling. At the head of this posse, of course, is Pennywise the Dancing Clown, the demon's most common incarnation.

Pennywise, a singularly wicked tribune of evil, is the stuff of nightmares. Utterly chilling to behold, he is a watchful and cunning foe who revels in the terror of his prey and carries with him more than a whiff of savage charisma, in or out of the shadows.

The sly manner in which he first slinks to the fore as a riverbank saviour for a drowning man, all glowing eyes and helping hands, is laced with menace and sudden, gleeful violence. Slaughtering children left and right, manipulating their innocence, Pennywise lurks over everything, his presence detectable in dark corners and dank sewers. He claws at the Losers' traumas, his brutality psychological as well as physical; he peers inside their emotional baggage and immolates the contents.

Behind the whiteface, Bill Skarsgård dazzles once again. He imbues his harlequin with an otherworldly disdain for weakness and a quavering sing-song voice that pitches high and low, dripping nastiness. At one point, he is glimpsed bare faced, a Victorian carnie-cum-mass-murderer, babbling and leering, his gaze askew. The performance is a thing of joyful, terrible wonder.

There are, no doubt, weaknesses. Chapter Two is in danger of dragging before the end and an extended sequence that separates the group into individual sub-plots robs it of the strongest element at its disposal. The picture suffers for want of the dollops of 80s nostalgia that made its predecessor so charming, while the reappearance of another antagonist from It is little more than a pointless, if occasionally amusing, distraction in an already crowded space.

Furthermore, one unexpected character development is heavily hinted at without being fully explored, a fleeting nod to subjects more topical than demonic murder.

Fortunately, Muschietti, saving his vision from devouring itself, turns in a grand climax. This is a cacophonous spectacle of spiralling madness and heroic endeavour, evil hammering hard against the forces of good. It reminds us of how strong collectives can resist the predations of bullies and that, if we hold fast, the bad times, too, will pass.

Posted by Matthew Coyle at 19:43 No comments: