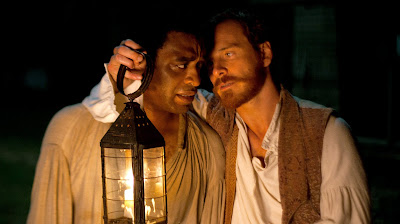 Hunger director Steve McQueen's Oscar-wining adaptation of 12 Years a Slave, Solomon Northup’s 1853 memoir of his time in bondage, is a brutal and essential historical drama, the roots of which burrow far beneath the roiling battlefield of racism and violence in the United States.
It may, given its subject matter, invoke Quentin Tarantino’s Django Unchained by offering an unvarnished view of the original American sin. That said, with its impressive period detail, 12 Years a Slave is a significantly deeper meditation, a merciless, unyielding look at the swelteringly barbaric ignominy of the plantation.
Yet, while Django – played with swaggering aplomb by Jamie Foxx – was fortunate enough to boast a six-shooter and a beneficent comrade in his pursuit of vengeance, Chiwetel Ejiofor’s Solomon is armed with nothing more than a heroic spirit in the face of his cruel subjugation.
An elegant musician and respected member of his community in upstate New York, his life is an idyllic one. He resides in a handsome home, his family learned and genteel. He is a ‘freeborn' black of the northern states, a term used to set him apart in a nation where colour determines status as either man or property.
Tricked by kidnappers into accompanying them to Washington, D.C., Solomon is drugged and sold into serfdom. It is an unremarkable event, it seems, given the colour of his skin. His new masters care little for the protestations that he is not a chattel, cynically informing him that he is in fact a "Georgia runaway". He will be a captive for the next 12 years.
It is a testament to the believability of Ejiofor’s towering central portrayal that the pragmatism Solomon must quickly develop to survive feels so necessary. He is not a rebel but a realist.
Hollywood loves a tale of noble resistance against oppression, its virtue swollen by self-congratulatory stories of the underdog rising up to defeat his tormentors. McQueen has no time for such make believe, of course. This is not the benevolent slavery of the hilariously outdated Gone With the Wind. Nor is it the institution that Django assails with such gusto, mined for laughs before its spectacular demise.
What is presented here instead is an intensely startling depiction of this cultural edifice as it was likely to have existed. Southern society was not alone in its reliance on slaves, but it is in the antebellum South that the trade was distilled into its vilest form.
McQueen is unsparing in covering the salient and chilling realities. Children are blithely ripped from their mothers' arms. People are commercial property, expensive assets to be mortgaged and haggled over. In this altered universe, happy domesticity lives cheek by jowl with humans hoarded like cattle and brutalised with impunity.
There is a wilful naivety, almost, in the fond reliance on people as possessions. Regular McQueen collaborator Michael Fassbender – as the unspeakably depraved "n*gger-breaker" and Louisiana plantation master Edwin Epps – dismisses pleas for mercy with contorted scripture and a frighteningly logical creed: "A man does as he pleases with his property."
That is not to say that the whites of Solomon’s new world see no ill in the system to which they are wedded. Each one of them appears sensitive, in a reluctant sort of way, to the perversity of slavery, no matter how little they care about its unjustness or attempt to rationalise it with baseless philosophy.
The warped structures of their world imbue these ordinary people – carpenters, farmers, landowners – with an apparently boundless facility for cruelty and prejudice. Epps’s vindictive wife, Mary (Sarah Paulson), is motivated in her bigotry by the need to corrode the spirits of those beneath her, lest she be butchered in the night.
Indeed, the seeds of America’s distressed racial discourse are here for all to see, each lash of the whip matched in ferocity by the dehumanising rasp of the N-word, thrown about with abandon, both weapon and tool.
Against this backdrop, McQueen – a Turner Prize recipient during his former career as a visual artist – contemplates, with unwavering grace, the callousness of Solomon’s fall, even as the richly captured locales, all bucolic farmland and humid refinement, present themselves.
The omnipresent savagery is often overwhelming. The camera lingers uncomfortably on moments of terror, be it Solomon's near lynching or the demented beating that Epps hand out to diminutive field worker Patsey (Lupita Nyong'o), Mary's pecking malice steering his hand. Later on, McQueen even trains his lens directly at Ejiofor's confused, heartbroken expression for what seems like a lifetime. No words are uttered but the sentiment is undeniable.
Alongside Ejiofor, the cast match the moment. Fassbender is, unsurprisingly, a force of nature. He conjures a performance laced with relentless fury and a spittle-flecked sense of superiority that veers between enraged and entitled. His wickedness infests everything around him and a leering obsession with Patsey is afforded no modesty.
Paulson, too, is superb, an ice-in-the-veins tyrant fuelled by caprice and deep-seated animus. Benedict Cumberbatch, Paul Dano, Paul Giamatti, Brad Pitt and Alfre Woodard flex their muscles throughout in small, though pivotal, supporting roles.
It is Nyong'o, however, who emerges as the stand-out, rendering Patsey fascinating and tragic in equal measures, and winning an Academy Award for her efforts. Ethereal, aloof and childlike, Patsey is a mass of contradictions. She is a survivor whose destiny is already written and her fate at the hands of the monstrous Epps – his gaze, hands, anger and sexual predation are rarely beyond her vicinity – is arguably the picture's greatest sorrow.
Posted by Matthew Coyle at 13:55 No comments: 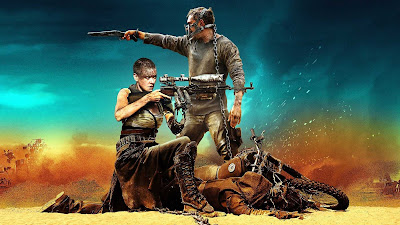 For all the abundant qualities exhibited by George Miller’s original Mad Max trilogy, its status as a somewhat cult staple in the post-apocalyptic canon, not to mention a 30-year absence from the zeitgeist, afforded the franchise’s newest entry, Fury Road, a relatively low-key arrival on the big screen.

That said, those intrigued by the continuing adventures of Max Rockatansky were promptly rewarded. This latest chapter is a magnificent, cacophonous and swaggering injection of purified adrenaline that banishes the kind of rubbish otherwise clogging up multiplex programmes, offering only Vin Diesel in return.

Quite where it sits in the wider franchise mythology is unclear. Sequel, reboot, or both; the truth is ultimately meaningless. Miller's has taken the dystopian tropes of the series and ratcheted them up with wild abandon, placing his glowering protagonist into the middle of a kinetic chase movie grand enough to remind us all of film's singular power.

Tom Hardy replaces Mel Gibson as the eponymous road warrior, whose lonesome existence on the plains of a cursed future Earth is disturbed when he falls into the clutches of the ghost-skinned War Boys, fanatical foot soldiers of cult-leader-cum-tyrant Immortan Joe (Hugh Keays-Byrne). He is turned into a living blood donor for Nux (Nicholas Hoult), an especially devoted follower, who, like almost everyone else around him – including Joe – is terminally ill thanks to the radiation that has gutted the planet.

Before long, Max is strapped to the front of Nux's wagon and sent out into the wastelands in pursuit of Charlize Theron's Furiosa, Joe's one-armed, trucking-driving protégé. Furiosa has gone rogue, liberating her boss's harem of "wives" in the process and making a break for "the green place", the land of her birth. And thus the chaos begins, Joe and his army scorching the sands in pursuit. Max, inevitably falls in with this rag-tag band of fugitives and he must rely on their skills, and they on his, to survive.

If it sounds potty, that's because it is – gloriously so. Miller's vision is a melange of idiosyncratic artistic endeavour and high-functioning cinematic spectacle; the particulars of every action, in every frame, strike a perfect balance between aspiration and execution.

Fury Road is, ultimately, a series of blistering set pieces that slash and burn their way across the screen, each more unhinged than the next. In one, the War Boys assault both Furiosa's rig and the reavers into whose territory she has strayed. They propel from one chariot to the next armed with exploding spears and a martyr's enthusiasm. Later, Furiosa leads Joe's convoy into the roil of a massive dust storm, an astonishing sequence of genuinely epic proportions. A third-act extravaganza sees murderous miscreants on vertical seesaws – "pole cats" – assailing their prey, all while Max and friends fight like demons, vault between speeding vehicles and stare into the jaws of death.

Aesthetically, this is a picture that will sear the eyeballs and suck air from the lungs. Captured in soaring high definition, the colour palette is rich and bracing, the roasted orange tones (of the Namibian desert) stretching to the horizon. There are islands of cool blues and lush greens, too, each one a welcome respite in a sea of desolation.

Ugliness abounds also. Miller has concocted a freak show's line-up to garnish the mayhem. Joe is a Trump-like gargoyle whose lardy body and weeping sores are hidden by a muscle-etched translucent carapace, his flowing snow-white hair, staring eyes and stentorian intonation finished off with a leering skull breathing mask that covers most of his face.

The villain's citadel headquarters is littered with grotesqueries: a stable of obese bare-breasted women attached to milking machines; various gnarled courtiers; and the hordes of desperate citizens living far below his penthouse, thirsting for the water he showers on them when the mood grips him. His expeditionary force is accompanied by a rolling platform carrying drummers and a blind, deformed metal guitarist whose instrument spits fire. Seriously.

Even the "wives" (including Rosie Huntington-Whitely, Riley Keough and Zoë Kravitz), sequestered in genteel isolation, register as weird. Their fertility and exquisite beauty are, after all, the chief causes of the demented atmosphere.

There are, mercifully, moments of quiet and it is here that Hardy and Theron come into their own. Both are truly skilful actors, capable of seizing their moments when the frenetic pace slows. Hardy, whose dialogue is as grizzled as it is spartan, draws out the goodness inside of Max, slowly but surely. He is an effective leading man, heroic yet more robust than invincible. Theron, meanwhile, is the tale's emotional and moral centre. Her flint-hard resolve is matched by a surety of purpose. She meets toxic masculinity head on, Wonder Woman without the gloss.

Miller’s resurrection of his iconic character may be deranged, but it is accomplished with such panache that the beauty in the pandemonium is its own reward. A reminder that blockbuster cinema is still able to captivate, Fury Road is the kind of rush that the medium required to stay true to itself.
Posted by Matthew Coyle at 13:23 No comments: