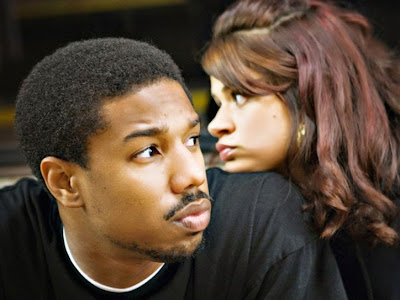 
That race remains an awkward fixture in America’s collective consciousness should come as a surprise to few. In the era of Barack Obama, its role in the continental melting pot has become even more pointed and antagonistic, the idiotic right-wing proclamations that the United States now exists in a place beyond racism being undermined every time another black male dies for reasons stemming from the hue of his skin.

In her seminal 2010 study of the modern prison-industrial complex, The New Jim Crow, Michelle Alexander’s suggests that public consciousness of prejudice is shaped only by the most ‘extreme expressions of individual bigotry, not by the way in which it functions naturally, almost invisibly… when it is embedded in the structure of a social system.’ Fascinatingly, Fruitvale Station, talent-to-watch Ryan Coogler’s searing directorial debut, captures that contention with a maturity many veteran filmmakers often fail to display.

Offering no judgement and little commentary, Coogler, nevertheless, produces a work of rare power; neither obscene nor violent, its message burrows to the core of Western society’s ongoing struggle with diversity and the residue of deep-seated maladies. Indeed, as recent local events continue to suggest, such problems do not reside solely on the far side of the Atlantic.

A darling of last year’s festival circuit — it won the Grand Jury prize at Sundance — the film, based on real-life events, depicts the shooting of a 22-year-old black man at Oakland’s Fruitvale metro stop on 1st January 2009. Returning from the new year celebrations in San Francisco, Oscar Grant was involved in a fracas on the train. Dragged from the carriage by a team of hyper-aggressive transit police, Grant and his friends were manhandled and detained for no specific reason. In the ensuing struggle Grant would be fatally wounded by an officer who claimed to have mistaken his firearm for a tazer.

Being 2009, this was, of course, captured on video and the confused, chilling, pre-HD images flicker across the screen before the titles roll. The remaining time is spent with Grant, living out 24 hours in the company of this anonymous and struggling ex-con, a statistic on paper, perhaps, but a beloved son, father and partner.

From the beginning, the central player is captured in handheld close-up, coloured with intimately human shades. There is admirable frankness in addressing his personal infidelities and history as a luckless former low-level dealer — a victim of the preposterous war on drugs — but, equally, Coogler is keen to highlight Grant as neither unusual nor especially remarkable. He is no different from anyone else and, in Michael B. Jordan, the director allows a fine actor to carry this narrative forward.

The Wire and Friday Night Lights were two of the past decade’s finest television dramas and ardent fans of both will be familiar with Jordan’s confident, hugely watchable presence. In each series the young performer portrayed misguided, yet sensitive, products of the streets. He invites empathy once again, casting Grant as an individual caught up in events larger than himself.

There is a quiet tragedy in the various unexceptional occurrences that come and go for much of the film’s duration: Grant drops his girlfriend to work and his little girl to school; he stops for petrol; he witnesses a dog hit by a car, cradling the animal in his arms as it slips away; he begs his old boss for a job, then threatens the man when it is not forthcoming; and he is assiduous in attending to a family birthday party.

To hustle is to live in the notoriously hardscrabble surroundings of Oakland, California, as much a feature of the daily grind as the quest for dignity. A potential cannabis deal is set against a flashback to Grant's last stint in prison, where the desperate need to embrace his mother (the always superb Octavia Spencer) is juxtaposed with the kind of jailhouse threats that will surely come back to haunt the issuer on the outside. Peppering his dialogue with authentic localised slang and vocal tics, Jordan imbues his character with an endearingly honest humanity.

Whatever the setting, it all represents the small, ordinary canvas onto which Coogler paints his larger themes of race, crime and inequality before the law.

In many ways, Obama’s historic success underscores much of what goes on here. In the the abstract, his accession to the White House was a boon for the African-American community. With a hispanic girlfriend (Melonie Diaz), and an adorable daughter, Grant’s existence represents the humble post-racial aspirations of the country’s better nature. On the other hand, however, the Obama experience is a remarkable one, rarefied even. It shares few parallels with the life of a kid from Oakland and there is no small measure of symbolism in the fact that Grant should be slain in those halcyon months between the president’s election and his inauguration.

The key incident, inevitable from the opening seconds, delivers the requisite visceral horror when it eventually arrives. Grant’s demise, in particular, is utterly heartbreaking, his mere profile inducing mass psychosis in those sworn to uphold, rather than trample, his rights. At the crucial point Jordan manages to convey an affecting mix of physical pain and a tearful sense of betrayal; the realisation of how this moment will impact those around him dawns long before he closes his eyes forever.

Fruitvale Station is a compelling, essential picture, a meditation on the destructive corrosiveness of Alexander’s invisible and embedded structures. If there is anything to take away, it is the fact that Coogler has managed, remarkably, to craft a film about racism that pivots not on recognisable prejudice but on an insidious function of the system. For the Oscar Grants of the world, the deck may already be stacked.

An edited version of this article was first published here.
Posted by Matthew Coyle at 10:55