Coronacinema - The Place Beyond the Pines 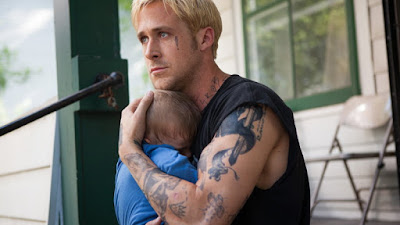 Gosling plays Luke, a carnival stunt rider boasting a placid air, hipster tats and a girl in every town. When his show pitches up in rural New York state, Luke rekindles a relationship with old flame Romina (Eva Mendes) before falling in with backwoods mechanic Robin (Ben Mendelsohn). Calling upon the latter's past-life expertise, he resorts to robbing local banks in order to meet family responsibilities.

In doing so, Luke comes into direct conflict with Bradley Cooper's Avery, a resourceful beat cop with his own domestic demands. The resulting dynamic leaves chaos and heartache in its wake, the fall-out from their violent acquaintance defining more than just each other. It places future generations on a course from which they may never escape.


Cianfrance proves himself a master in pulling it altogether. His is a quietly searing elegy that brings indy sensibilities to bear without ever once losing its connection with a wider audience. Shot in rich, natural hues, The Place Beyond the Pines (the title references the English translation of the Mohawk name for Schenectady, the film's location) captures the lush verdancy of upstate New York — a world away from the roiling avenues of Manhattan — a tranquil backdrop against which this fraught tale plays out.

Indeed, the director's framing is so tight, his story so involving, that a final-third shift of narrative setting could almost constitute a subtle plot twist. This flourish is not a crucial element of the whole, perhaps, but it does speak to the confidence with which Cianfrance approaches his work. Elsewhere, a dazzling opening long take, which culminates with three riders risking it all in a Globe of Death, undoubtedly sets the tone.

At the top of the bill, Cooper and Gosling turn in superb performances that neatly subvert their contrasting stereotypes. Gosling's Luke eschews his rootless carny shtick. A well of substance sits beneath his largely impassive exterior and though there is violence, too, it disappears as swiftly as it emerges. Notably, he is never once pushed to provide for a child he didn't know existed; the risks he assumes stem from demands he places on his own shoulders.

Cooper, meanwhile, portrays an ostensibly good man thrust by circumstance into the spotlight. Yet, once he is there, he is quick to further his own lofty aspirations and it is testament to Cooper's chameleonic abilities that these efforts never feel quite admirable nor especially queasy. Softly spoken and more cunning than initial appearances suggest, the swiftness with which Avery climbs the ladder should chill even dispassionate observers.

Beyond that duo, a collection of equally fine actors bring their skills to bear. Mendelsohn, equal parts affable and shifty, is typically magnetic and Mendes impresses as Luke's on-off lover, her affinity for the picture's unfussy stylings showing through early on. Two-time Oscar winner Mahershala Ali accomplishes a great deal with limited screen time. The innate decency that he carries in his every expression serves as a perfect antidote to the deficiencies exhibited by others.

Elsewhere, Ray Liotta's trademark stare is put to good use as a corrupt police officer, while Brooklyn's Emory Cohen — playing Cooper's attention-starved son — is outstanding, his irritating swagger and faux urban drawl the gauche affectations of an unworldly teenager.

An involving and handsomely realised neo-noir, The Place Beyond the Pines offers up an ambitious, profoundly affecting study of how legacy and fate intertwine, and how no action is ever free of consequence.