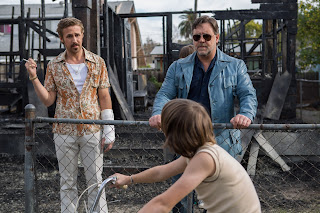 The pastel shades and neon nightscapes of 1970s Los Angeles receive the Shane Black treatment in The Nice Guys, a meandering buddy comedy that plays fast and loose with message and form, but succeeds, ultimately, on star power, as well as the confidence of its cheeky writing.

This is Black's third film at the helm and while Iron Man 3 was largely an exercise in frustration, 2005's Kiss Kiss Bang Bang satisfied as a debut effort, one driven on by Black's ability to mine gold from unlikely sources (Val Kilmer as a gay private detective possessing a fondness for the c-word, anybody?).

After his Marvel sojourn, then, the writer-director returns to Kiss Kiss's neo-noir framing. Rolling out a tale as unpredictable as it is knowing, Black's hardboiled dialogue, crafted in concert with Anthony Bagarozzi, spills out from between the cracks of a sunny, often very silly period actioner.

It is entirely possible that absent the over-the-title A-listers, The Nice Guys could have been swallowed up by its own casual smugness. Instead, Russell Crowe and Ryan Gosling are entirely engaging leading men, capable of delivering their lines with a sense of wit and clearly so at ease in each other's company that one feels genuine regret that this connection has had to wait until now.

Crowe plays Jackson Healy, an enforcer-for-hire whose core services involve punching people in the face and then breaking their arms. When one of Healy's clients, Amelia (Margaret Qualley — seen most recently in HBO's beautiful, bizarre The Leftovers), goes missing, Healy falls in with licensed gumshoe Holland March (Gosling), himself pursuing a case that may or may not involve the other man's employer.

Gosling excels in his role, breathing easier without the yoke of intensity he often assumes to break away from that meme-friendly, matinee idol persona. Shifty, amoral and teetering on the brink of alcoholism, March is a pretty shitty investigator — though an endearingly useless, if devoted, single father to Holly (Angourie Rice), his razor-sharp pre-teen daughter — who must enlist the help of the bulky Healy to track down their mysterious quarry

The result is an enjoyable mish-mash of genres, each jostling for position without ever properly winning out. Fans of Black's work will recognise his proclivity for splicing action and sarcasm, two elements he throws out here to good effect. Crowe and Gosling riff off each character's failings (Healy is a thug, March a borderline degenerate) with glee, a seemingly unending crusade to discern the plot coming a distant second to exploring the limits of their chemistry.

Indeed, the central players do much to pick up the slack of a story that threatens to spiral away from them more than once. What might have been a tight little mystery instead throws much at the screen; some of it sticks, other bits do not. The staples of the milieu are all present and correct: corruption, vice, drugs, booze, gut-churning fashions.

Throw in a disco soundtrack and Black appears determined to address, with equal concentration, every single idea his mind chugged out in bringing this vision to life. If it seems muddled, that's because it is. Events will, of course, eventually become clear, yet such is the density of their presentation, keeping track is no small task.

Mercifully, however, the leading men possess enough charm to drag us along for the ride, wherever the road winds.

There exist some nice touches to punctuate the violence and hard-bitten tropes. America's post-Nixon decline is a spectre even in California's glitzy locales (a masked, Point Break-inspired Tricky Dicky figure even makes a cameo) and the belief in the immortality of the hulking auto industry — one strand of the broader conspiracy at play — sounds woefully naive as more and more of Detroit's outer reaches are now reclaimed by Mother Earth.

Kim Basinger, too, shows herself later on, firing up old memories with Crowe as if back in the LA Confidential surroundings that have so clearly coloured Black's approach. Just don't take any of it seriously.
Posted by Matthew Coyle at 23:41