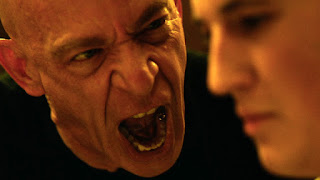 J.K. Simmons gives the performance of his life in Whiplash, sophomore director Damien Chazelle’s scorching jazz opus, fully justifying his recent win at the Golden Globes in the best supporting actor category and propelling himself, almost certainly, into pole position for the same award at next month’s Oscars.

The ever superb Simmons has made a living out of portraying gruff autocrats and falls comfortably under the broad heading marked ‘That guy from that thing.’ His terrifying band conductor, Terence Fletcher, however, is infinitely more fascinating than almost every other character he has portrayed in a career taking in a diverse slate, from Sam Raimi’s Spider-Man trilogy to the Jason Reitman-directed Juno.

Fletcher, to put it bluntly, is a monster, an arrogant, vicious bully whose reign of terror over an in-house band at the fictional Shaffer Conservatory is absolute. Wielding a volcanic temper and the ability to shatter the confidence of grown men, Fletcher’s roiling conflict with jazz drummer Andrew Neiman (Miles Teller) catapults Chazelle’s astonishing psychological drama towards a remarkably breathless conclusion.

In suppressing his previously fratty leanings, Teller plays Neiman with rare gusto, banishing the memories of the ropey fare (Divergent, Footloose, 21 & Over, and That Awkward Moment, to name only a few) in which he has served his time thus far. He possesses a fine ability to slide between personalities, gentle and polite in one moment, pushy and abrasive in the next. It is a gift which is tested to the extreme by Chazelle, who throws his main character — a talented, but fragile, young musician — into the bear pit overseen by Simmons’s tyrant.

Eager to please from the off, Neiman is unprepared for what awaits him: a sustained mental assault offset, initially, by Fletcher’s obviously insincere early pep talk. Intensely ambitious, the new recruit is, nevertheless, soon floored by the ferocity of his notional mentor’s rage. Within minutes Neiman is a sobbing mess, Fletcher cruelly, and publicly, twisting personal details offered in confidence only minutes before.

Taking its title from Hank Levy’s standout composition — chosen for its maddening complexity — Whiplash quivers with a relentless, violent tension. It is ultimately inescapable and destructive. Simmons channels every sneering dickhead teacher you ever wanted to punch but couldn’t; he luxuriates in the wickedness of his villain. In one scene, he drives three drumming hopefuls long into the night until they match his tempo, unleashing upon them a torrent of world-beating verbal abuse targeting all groups in the room: the Jews, the Irish, gay people.

The poison seeps into Neiman’s pores, corroding his kindly nature, the tentative romance with a nice girl (Melissa Benoist) and the relationship with his devoted father (a solid Paul Reiser), at whose table he insults a gathering of friends with an unnecessarily snide critique of small-town values. It even chisels away at the tower of fear upon which Fletcher stands to survey his meek charges. When the boss dares to consider a change of lead drummer, Neiman, pushed to the brink by self-imposed and prolonged physical torture — equal parts perspiration and blood — explodes in a fraught five-minute sequence, which takes in a blown tyre, an actual car crash and even a brawl.

Chazelle has explored this musical milieu before with his somewhat abstract debut feature, the little-seen festival favourite Guy and Madeline on a Park Bench, and it is clearly a world in which he is invested. Save for the veracity of an oft-repeated anecdote about Charlie Parker’s ascent to jazz immortality, his latest appears steeped, for the uninitiated anyway, in genre lore. The prophet of this unpredictable medium is the white-faced, black-clad, gimlet-eyed Simmons, who owns the film, even with Teller’s quite brilliant input.

Fletcher is no mere cartoon, eventually displaying depths that do not quite tally with initial impressions. His tears at the death of a former protégé are sincere. So, too, is the friendly small talk he exchanges with a small girl and her father in a backstage corridor. Later, as fate takes him in a new direction, he explains, with gentle clarity, that his job is not to patronise mediocrity but to induce greatness, by whatever means necessary. That said, a wounded lion is still a lion and the show-stopping final number serves as a chilling reminder that those early eruptions simply covered darker traits.

That finale is transformative; Neiman sheds potential for glory. In doing so, Teller strains every muscle to convey something fleeting and largely indescribable. Sweat-drenched, alive with an urgency that only great films can induce, if Whiplash cannot be classed as a thriller, it is no less thrilling.

An edited version of this article was first published here.
Posted by Matthew Coyle at 15:54