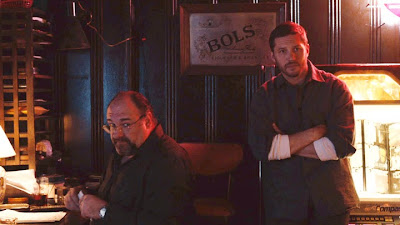 When James Gandolfini passed away suddenly in June 2013, he did so possessed of an acting legacy more or less characterised by a hoodlum. It was no mere hoodlum, of course, for mobster Tony Soprano defined a generation, as much a part of post-millennial pop culture as the humble iPod.

A wonderful actor, naturally kind of countenance and refined of speech, Gandolfini was born to portray the brashly complex Jersey mafia boss, relying on his skill, bulk and deep Italian roots to drag television, almost single handedly, into its second golden age.

There is a faintly cruel irony, then, in the fact that Gandolfini’s final role should come playing low-level wannabe gangster Marvin Stipler, the grizzled anchor of Michaël R. Roskam’s potent, desolate crime drama, The Drop. Stipler is a tragic figure and failed hustler, the kind of guy who feeds at the thin end of the trough before kicking up most of his meagre earnings to someone like Tony Soprano. Devious, yet utterly without good fortune, the man known throughout as Cousin Marv represents a fitting final entry in the Gandolfini canon.

Based on Dennis Lehane’s newest novel, The Drop reeks of that author’s weighty Boston anthology, from Mystic River to Gone Baby Gone. Lehane has made a successful career from mining thrills out of his native city’s blue-collar Celtic underbelly — Red Sox games, funny accents, grumpy Irish-Americans — and whether they are contemporary or period (Shutter Island, The Given Day) each tells a gripping tale rich in character, ripe with atmosphere.

The Drop is no different from its creator’s established pedigree and, owing to Bullhead director Roskam, this cool urban noir is well served by a subtle infusion of Belgian elegance. Lehane’s muscular source material is a spare effort, an extension of his own short story, Animal Rescue, which inspired him to write the screenplay here before fleshing out the concept in literary form. Roskam seems inspired by his collaborator’s style. Choosing to leave the tone undisturbed, he delivers a brilliantly acted, terribly impressive English-language debut that is infinitely smarter than it initially appears.

Tom Hardy plays Bob Saginowski, the unassuming barman at Cousin Marv’s grotty establishment. Transposed by Lehane, for no apparent reason, from Boston to Brooklyn, the bar is a front owned by the sinister Chechen mob and used, on an irregular basis, as a storage waypoint for the gang’s dirty cash. With his own survival in mind, the gentle Bob is uninterested in little beyond pulling pints and labouring diligently for Marv, his actual cousin.

After his demented turn in the recent series of Peaky Blinders, Hardy’s brooding visage is a welcome change. He paints Bob in a variety of unthreatening shades: loyal, devout, unworldly. The undertones of crackling tension with Marv, however, are especially fascinating. As former members of an insignificant crew, the pair occupy similar places in the local pecking order but Bob’s calm contentment — symbolised by the adorable boxer puppy he rescues from a trash can and a tentative romance with the flinty Nadia (Noomi Rapace) — is an irritant that Marv, an unfulfilled never-really-was, simply cannot shake.

Hardy and Gandolfini convey a time-wearied sense of solidarity built on familiarity, not affection. When it is shaken by an armed robbery at the bar, along with the unwelcome arrival of unhinged extortionist Eric Deeds (Matthias Schoenarts), their lightly squabbling dynamic takes on a darker edge. Tellingly, Roskam establishes the Bob-Marv relationship as his focal point; money must be reclaimed and ties severed. The film, stripped of those few ancillary elements included in Lehane’s book, feels all the better for it.

As the ensemble suggests, Roskam’s greatest asset is a stellar cast. Hardy, Rapace, John Ortiz; these are some of the finest performers currently working. Gandolfini’s presence speaks for itself but, for those familiar with his résumé, it is no surprise to see Schoenarts stand out. His physicality, so magnetic in Rust and Bone and the Oscar-nominated Bullhead, has been reigned in, replaced by an air of violent childlike neediness. Resting, unpredictably, between unsettling stalker and outright crook, Schoenarts is the director’s scruffy wild card, an unpleasant sadist whose Flemish inflection is lost beneath a seriously impressive New York drawl.

Pared down to its most visceral components, The Drop ultimately succeeds in moving from wintry thriller to effective mystery. Personified by Ortiz’s watchful detective, the latter strand may fail to truly titillate, yet it is, nevertheless, slickly accomplished. Lehane is famously partial to a twisting finale and the instant conceit is genuinely clever, both revelatory and easily grasped.

Do not believe everything you see.

An edited version of this article was first published here.
Posted by Matthew Coyle at 11:44