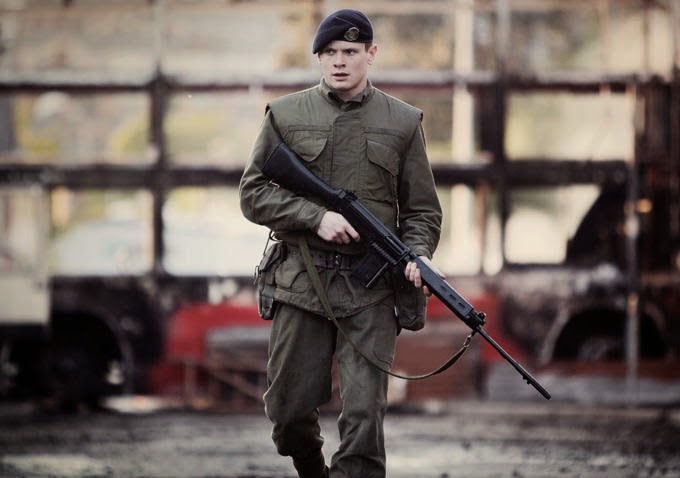 There have been more films than one might expect about the Troubles. Most have been terrible. The Devil’s Own saw Brad Pitt hiding his tortured Northern Ireland brogue behind a pout and a whisper; Five Minutes of Heaven (a film not without local flavour given the presence in its cast of Liam Neeson and James Nesbitt) offered a fairly preposterous portrayal of the foulness tearing through the country during the 1970s. Even those Belfast scenes in the ostensibly superb Patriot Games — slums, ‘IRA’ graffiti and football-playing urchins — were cringe-inducing in their simplicity.

Only Steve McQueen’s visceral Hunger and Paul Greengrass’s Bloody Sunday have, arguably, captured the complicated essence of a landscape multiple filmmakers fail to traverse with success.

For director Yann Demange, the decision to tackle Belfast’s former self in ’71 might have proved a disastrous one. Yet, like McQueen before him, he brings an original touch to a subject often plagued by cliché and free of nuance. Demange was born in Paris and raised in London. He made his bones in the latter, directing gritty television drama Top Boy and thus he is no stranger to the milieu at the core of this brilliant, coiled, pulsating thriller. Nevertheless, in bottling the spirit of something so concentrated, so specific, Demange — making his feature debut — has marked himself out, remarkably, as a cinematic talent of near boundless horizons.

As the title suggests the year is 1971. Somewhere in England, Gary Hook (Jack O’Connell) and his fellow squaddies are put through their exercises in anticipation of a deployment to Germany: eager and clear-eyed, ready for army life, well-suited to their coldly regimented existence. Awoken in the middle of the night they are informed, however, that the plans have changed. The security situation in Belfast is deteriorating, that is where they are headed now. ‘Do any of you know where Belfast is?’ barks the gruff sergeant. ‘Northern Ireland? The United Kingdom? Here?’

In truth, none of them can begin to imagine the hornet’s nest into which they are casually dropped. Almost immediately, Demange conveys the blind confusion which defined countless soldiers’ searing baptisms in the ways of Northern Ireland’s turmoil. That crucial tipping point occurs early on as Hook and his squad are set upon during a riot. In an instant he becomes isolated, cut off from the unit, scrambling to outwit the band of murderous paramilitaries (including Belfast’s own Martin McCann) intent on claiming his scalp.

From that point on, Demange is keen to push hard on the throttle. This is a film hurtling toward its own breathless conclusion, easing the pace at times, though rarely releasing any building pressure and that sense of urgent paranoia nipping at Hook’s heels.

Such an approach proves successful. Sticky politics are avoided; there is no agenda to push, nor time to bother with tiresome sectarian issues. It is a merciful sleight of hand for which screenwriter Gregory Burke — the playwright behind warts-and-all military drama Black Watch — must receive substantial credit.

Survival is the priority here, not education and if Demange occasionally opts for a dollop of 'Northern Ireland 101', the authenticity stays intact thanks to Hook, the chronicler of this harrowing ground-level warfare. A resourceful warrior he may be but Hook is not a man steeped in the complexities of modern Irish history. While a knowledgeable audience might not require spoon-fed information, he certainly does.

In the lead role, a towering O’Connell oozes believability, imbuing his character with a desperate will to endure and no little humanity — one early scene sees him returning to his hardscrabble Derby neighbourhood to bond with the kid brother condemned to state care. Later, as the fires rage, O’Connell understandably wears the expression of a stunned animal, unsure in these surroundings, ignorant of why his notional safety depends on him stumbling into the right street.

One of the finest young British actors working today, he has tried his hand at more than one genre (300: Rise of an Empire, Angelina Jolie’s upcoming directorial epic Unbroken), excelling when asked to personify wiry symbols of working-class youth disaffection in grimier domestic fare, from Eden Lake to Starred Up.

Quieter moments involving Richard Dormer’s good Samaritan are elegantly done — he tentatively bonds with Dormer’s teenage daughter over contemporary pop music and the Derby-Nottingham divide — yet remain laced with a sense of foreboding that Hook, for all his innocence, is right to discern.

This atmosphere is ably captured by cinematographer Tat Radcliffe’s visual palette. His surprisingly rich, earthy tones and frigid nightscapes are painted onto the canvas provided by Blackburn, Liverpool and Sheffield, each standing in for a scarred version of Belfast that peace money has now scrubbed away.

Indeed, the steel city’s iconic Park Hill estate, a brutalist urban edifice currently undergoing its own regeneration, does a nice turn passing for the long disappeared Divis flats, that iconic hinterland of normality and chaos. David Holmes’s coolly disengaged score, too, colours the action, providing the soundtrack to a depiction of his home town that will seem alien to many.

Considering the speed at which the action moves, bumps are inevitable. The always sinister, multi-accented Sean Harris leads a cartoonishly villainous covert military unit which colludes with loyalists, recruits republicans and plots mayhem as a matter of daily routine. The strand is not entirely out of place in this context, of course, but it is underwritten, an unnecessary distraction in an otherwise gripping period tale.

This is, however, an arc with ominous implications for the spartan finale. The late David Ervine regularly lamented that ‘dirty stinking war’, a conflict fuelled as much by corruption and injustice as by politico-religious fervour. It is not a view with which Gary Hook is likely to disagree.

A version of this article was first published here.
Posted by Matthew Coyle at 22:45