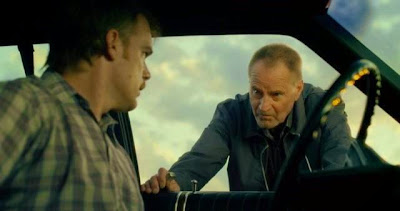 As fiction genres go, there are few more popular at present than Southern Gothic. The success of HBO’s astonishing True Detective series has championed the clinging heat of the American South, with its good ole boys, murky secrets and underbelly as black as pitch. Thus, it comes as no surprise that Cold in July should feel so familiar. Its genetic code and that of Nic Pizzolatto’s acclaimed police procedural are, after all, similar in nature, if not execution.

Maybe it’s the heat. As with True Detective, Cold in July is far from frigid. While the HBO action plays out in the sweltering climes of rural Louisiana, this perspires in the stifling humidity of an East Texas summer. That backdrop is not the arid expanse of desolate Texan oilfields but a verdant Americana, a place rich with good soil, solid values and lots of air conditioning.

It all colours a sticky adaptation of Joe R Lansdale’s 1989 novel bearing the same title. With a twisting, restless plot that invigorates rather than confuses, indie director Jim Mickle — best known for low-key Zombie apocalypse movie Stake Land — channels his inner auteur, producing a picture of significant style to herald his arrival as a genuine talent to watch.

Michael C. Hall portrays Richard Dane, a respectable small-town businessman who fatally shoots a home invader in the middle of the night. There are immediately clear echoes of David Cronenberg’s A History of Violence in this unassuming-family-man-kills-unwelcome-visitor theme, though Mickle is less committed to that film’s sense of rampant paranoia. Instead, he restricts the crucial event to the virtual beginning and focuses his remaining time on the fraught period thereafter.

Hall, who sweated through seven years of Miami-based psychopathy in Dexter, is a wonderfully elusive actor and in the lead role his discomfited exterior, both brooding and fussy, is heightened by sincere remorse for what he has done. His is an attitude somewhat at odds with the police who dismiss the incident like loyal second amendment disciples. Dane is a good man, however, and his mood is not lightened by the arrival of the departed intruder’s taciturn father, Ben Russell (Sam Shepard, on typically restrained form), a newly released convict with vengeance in mind.

Cold in July moves swiftly through the gears at this stage, vaulting first from human drama to revenge saga and then, as the spectre of police corruption creeps into view, Mickle once more tacks in a new direction. Retuning the narrative, he subverts expectations at these important junctures; priorities are upturned. It is enough to keep everyone on their toes.

Suddenly allies, Dane and Russell burrow to the core of a conspiracy best personified by urbane police detective Ray — played by Mickle’s quasi-muse and screenwriting partner, Nick Damici. In doing so they are aided by the quite fantastic Don Johnson, whose unpredictable, stetson-toting gumshoe, Jim Bob Luke, is as adept at sniffing out the truth as he is rearing pigs.

This swirl of activity never feels crowded, mercifully, and Johnson’s especially anarchic presence remains relatively grounded. What is perhaps most notable is the feeling that a transformative journey has occurred, for this is a very different beast by its finale.

Mickle straddles genres in pursuit of absolution and proves that such an episodic approach is eminently watchable if the distinct elements knit together properly. Accordingly, he strikes out for his slippery conclusion with kinetic purpose, moving from section to section without looking back, the tone ranging from slyly playful — the jaunty cleaning of a crime scene is both strange and compelling — to downright bleak. If the goal is to maximise each moment, then the ultimate result is triumphant.

There is violence here, also, and it is in the closing minutes that the rage nibbling at the edges throughout, chooses to explode so spectacularly. Mickle’s final gambit, his last statement, is to paint it as an action and a consequence: violence does, of course, beget violence. There may have been a faintly ethereal quality to the cajun occultism depicted with skill by Pizzolatto but Lansdale’s tale is centres on something much grubbier, a foul blot calling for a bloody intervention.

That said, the true ambivalence exists in Dane’s experience. Is he committed to correcting this chaos because it is the right path to follow? Or is he simply in search of a thrill, a break from his normally cosseted life? The answer likely rests somewhere in between. That Dane ends up, literally, where he started is certainly symbolic but the intervening period has induced an unpredictable awakening, a possible rebirth.

Stylistically, Cold in July is no less impressive. Taking place at the fading end of the 1980s, Mickle has sprinkled his movie with playful era-specific clues, a cassette player here, a video rental store there. Even Hall’s mullet, just the right side of obscene, plays to the gallery. In addition, the archly retro score — a synth-heavy soundboard given renewed relevance by Nicolas Winding Refn’s Drive — appears, initially at least, out of sync with the overall mood yet, as the tension builds, so too does the power of Jeff Grace’s knowing composition.

Indeed, speaking of Refn, the scene in which one character’s blood, artfully sprayed upon a ceiling light, fills the screen with a delicate scarlet glow should worry the Danish filmmaker for the simple reason that it is infinitely more visceral and stylish than anything in his studied, wildly indulgent Only God Forgives.

Taken as the sum of its parts, this is an undeniably impressive project but the expert manner in which the director attends to the distinct components, with enthusiasm and no little panache, stands out above all else. As muscular as its pulpy source material, Mickle’s thriller suggests that the South might still rise again.
Posted by Matthew Coyle at 11:39