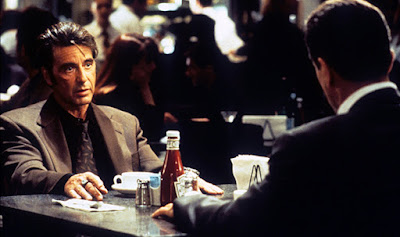 Michael Mann's sprawling LA epic is, most certainly, his finest film. This pulsating crime thriller ripples with all of its creator's best traits and boasts two lead performances from, arguably, the greatest actors in modern American cinema.

An upgraded reboot of Mann's little-seen 1989 TV movie LA Takedown, Heat is a modern masterpiece of quite dazzling scale and execution. This tale of obsession and discipline, loneliness and intimacy, centres on the exploits of Robert De Niro's Neil McAuley, a slick, watchful big-league armed robber with an affinity for major scores and no tolerance for loose ends.

In his wake, Al Pacino plays it scalding hot and ice cold, often in the same scene. His LAPD detective, Vincent Hanna, is a dogged lawman with good tailoring, unashamedly impressed by the McAuley crew's high-end professional expertise.

Around this central premise, a horde of colourful subplots swirl, covering disparate themes: marital strife, serial murder, childhood depression and the self-control required to eschew true human connection. They all feed into an overarching story of deadly hunter and lethal prey.

The results are magnificent. Heat is a juggernaut, its DNA rooted in the hardscrabble industrial locales, faded glitz and endless highways of the LA cosmopolis. Mann, inevitably, crafts a sleek and utterly beautiful film, splicing mournful blue-tinged backdrops with scrubbed realism. He is as comfortable inside the steam and bustle of a grubby dinner as he is gazing out over a glittering nighttime cityscape. The ambience he conjures so adroitly, regardless of location, is one of transience and impermanence.

However, the picture is ultimately defined by two sequences of contrasting tone. In the first, De Niro and Pacino go head to head in a faceless coffee shop, amid the din and swirl of the world beyond their dynamic. Facing each other across the table, circling like beasts in the moments before the clash, they trade barbs, issue frank threats and offer veiled respect.

McAuley is fuelled by the surety of his monk-like ethos — "Don't let yourself get attached to anything you are not willing to walk out on in 30 seconds flat if you feel the heat around the corner" — while Hanna, marriage number three crumbling in the background, fixes his singular gaze on the task at hand. They are, it seems, two sides of the same coin. The exchange is an electrifying one, much of the palpable tension surely stemming from the fact that De Niro and Pacino are titans whose distinct real-life skill sets have, up until this point, never occupied the same space on screen.

The second pillar upon which Heat rests is, of course, its astonishing, relentless and cacophonous police-versus-thief shootout. Occurring late on, it sees McAuley and friends — besuited, in dark glasses — turn a busy city street into a war zone. The thunder of their rifles and the pounding of shoes on tarmac are the only things approaching a soundtrack. Bullets tear through metal and glass, and ricochet off concrete; it is a savage and searing slice of pure cinematic adrenaline, Mann capturing it all in breathless close-up.

A gorgeous synthesised score rounds out the ensemble, its melancholic notes giving form to a sense of longing that defines the quieter moments. For all its loud muscularity, this is a film floating on sadness, a film concerned with how displaced people exist, even within their own natural habitats, each seeking just one more moment to mean something, to someone. Friend or foe. Good or bad.