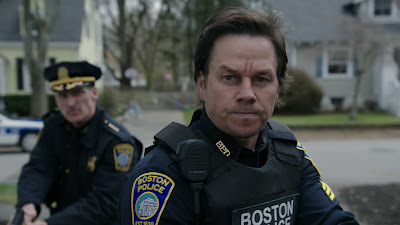 The 2013 Boston marathon bombing forms the backdrop of Patriots Day, the third collaboration between the Lone Survivor-Deepwater Horizon duo of Peter Berg and Mark Wahlberg. The director's latest big-budget, ground-level take on real-world events, Berg's preference for building the action around ordinary people forms the core of this sprawling, forensic thriller.

Few movie stars can pull off as convincing a baffled-everyman-facing-mighty-challenges act as Wahlberg and it serves him well, his plucky cop caught up in a savage act of terrorism and its immediate fallout. Portraying homicide detective Tommy Saunders – hobbled by a barely explained knee injury and in the dog house for an unspecified infraction – Wahlberg channels the admirable spirit of his native city, displaying with brio its grit and willingness to weather even the most towering of challenges.

Berg's schtick is well established at this stage of his career and the obligatory mix of shaky, intimate camera work, blue-collar dialogue and meditative post-rock melodies is in place almost from the beginning. This overlays the careful construction of the disparate circumstances leading to the detonation of two homemade bombs at the finish line of Boston's biggest annual community gathering.

With Saunders and his wife, Carol (an underused Michelle Monaghan), at its centre, Patriots Day's jigsaw comes together: the terrorist Tsarnaev siblings (Alex Wolff and Themo Melikidze), sucking in radicalism amongst their domestic clutter; Jimmy Yang's jolly entrepreneur pursuing the tangible benefits of the American dream; veteran copper Jeffrey Pugliese (J.K. Simmons, turning in a elegantly understated performance) observing terror from the safety of his sleepy suburb; and Jake Picking's MIT policeman courting the girl he's sworn to watch over.

Each strand – and there are more beyond – feels real, an honest depiction of non-fictional characters, each with hopes, dreams and aspirations. It is to Berg's credit, then, that when the fires come, and carnage descends, we experience their pain and despair. Interestingly, the director does not linger on the actual bombings. From a technical standpoint, they are stunningly violent, yet, with a nod to the obvious reality that many wounds will remain raw, the explosions avoid coming off as cheap spectacle.

In their immediate wake, Berg conveys the slick efficiency of American law enforcement. Alongside civic leaders, the FBI is instantly in control, headed up by Richard DesLauriers (Kevin Bacon), a rottweiler of an investigator as quick to fasten onto the minutiae of a crime scene as he is to address the toilet shortage in his makeshift HQ. With Wahlberg's shaken eyewitness serving as an expert on the lie of the land, the investigators pursue their quarry.

A relentless pace, even in these procedural moments, holds the attention. As the Tsarnaevs are identified, traced and located, the narrative paints their own experiences over those days, stitched together from the testimonies that eventually brought the younger brother, Dzhokhar, to his current residence on death row. There is no shying away from the savagery of those actions and the concluding gun fight on the streets of small-town America is terrifying in its intensity. That said, the obvious bond between the pair undoubtedly draws sympathy.

Some of the film's more considered trappings succeed, some do not. The intermittent image of a state trooper standing watch over the unclaimed body of murdered child is beautifully understated, while, at the other end of the scale, Yang's sweary condemnation of the Tsarnaevs after they hijack his car is little more than a shot of gauche Americana.

As a chronicle of an attack that signalled to America the very real threat of domestic radicalisation, Patriots Day is stylish and worthy. It shouldn't be missed.