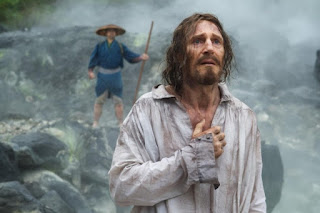 Religious symbolism has always been central to the work of Martin Scorsese. From Boxcar Bertha to Dalai Lama biopic Kundun, with Mean Streets, Cape Fear and, of course, The Last Temptation of Christ in between, Scorsese, the one-time seminarian, has never shirked from matters spiritual.
His latest movie, Silence, is arguably an apogee of this ever-evolving relationship with religion. In gestation since 1990, and long considered a passion project, this is the second filmic adaptation of the novel by Shusaku Endo, published in 1966, which centres on the travails of Portuguese Jesuits in 17th-century Japan. Boasting weighty overtones and themes of sacrifice, contrition and faith, there can be no denying Scorsese’s direction of travel.
The result of the director’s efforts is, as one might expect, a monumental, courageous historical epic, as powerful as it is arduous. Silence simply cannot be ignored.
The picture’s holy trinity is delivered in the shape of Sebastião Rodrigues (Andrew Garfield), Francisco Garrpe (a superb Adam Driver) and the duo’s erstwhile mentor, Liam Neeson’s Cristóvão Ferreira. When reports filter back to the Society of Jesus that Ferreira has, under torture during the anti-Christian purges of the Tokugawa shogunate, disavowed God, Rodrigues and Garrpe are dispatched by their superior, Father Valignano (Ciarán Hinds), to search for truth in the murk of a Japanese society insanely hostile to Christ’s teachings.
The chronicle of their quest is an astonishing one. Scorsese weaves a tapestry of tribulation and torment, plunging his idealistic padres into an unforgiving landscape, one that immediately tests their learning and adherence to the power of the almighty.
This is a tale made for the big screen, luxuriating in its director’s archly cinematic tendencies, yet there is little effort here to toy with the structure. Instead, a largely straightforward plot’s challenges arrive via a focus on the meaning and efficacy of blind acceptance.
Scorsese does not linger in bringing it to the fore. His opening scene features Neeson (the white whale of the piece’s 161-minute running time), broken and detained, witnessing a band of fellow missionaries undergoing one of the shogunate’s many inventive methods of torture — subtlety is no obstacle.
Indeed the trials of Rodrigues and Garrpe seem just as intense. Landing under the cover of night, they immediately begin ministering to the Christians who greet them. Forced to cower behind closed doors and conceal their practices from all but a few, these haunted natives receive their European visitors as saviours, a reality that, at first fulfils the young priests, only to turn sour when the local inquisitor, enacting the nation-wide pogrom against the ‘Kirishitans’, sniffs out this evangelising.
From this point, events become increasingly fraught. Garfield, an assured presence, carries the bulk of the film on his shoulders. Forced to answer for his steel-clad convictions, even in the face of others’ suffering, he soon begins to ruminate on those ideas. ‘The weight of your silence is terrible,’ Rodrigues whispers towards heaven, the once high walls of his faith shaking beneath the weight of doubt. Scorsese pulls no punches in dragging him towards the edge, capturing moments of savagery with an unblinking eye. Men are decapitated, martyrs are crucified and drowned; families form human pyres as their neighbours watch on.
More unsettling is the frigid calculation behind these cruelties. The authorities do not seek to terrify, rather they wish to humiliate and degrade, using the tenet of sacrifice against the very people who so willingly espouse it. Later on, Tadanobu Asano’s urbane translator squirrels inside Rodrigues’s mind, questioning the sense of his beliefs with calm efficiency. This is no story of Christendom’s triumph over the distant unbelievers. The opposite is underlined more than once: while the Japanese readily grasp Christianity’s precepts, they’re simply not interested in embracing them.
As a work of artistic endeavour, the film ably succeeds. Cinematographer Rodrigo Prieto conjures more than one arresting image, be it a floating overhead view of the priests’ sea vessel, the Messiah’s visage in a reflecting pool or the mist-shrouded verdancy of rural Japan.
On a more profound level, however, Scorsese’s commitment allows for an immersion in the material that other filmmakers might otherwise fail to accomplish. Silence is no easy watch, but, with a multitude of urgent questions demanding equally urgent answers, it is an essential one.

This article was first published here.
Posted by Matthew Coyle at 14:48