A Most Violent Year 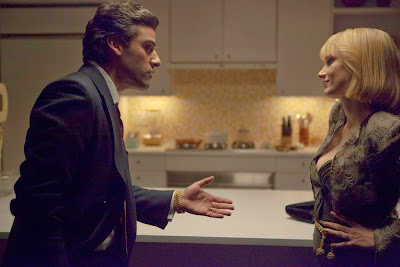 J.C. Chandor does not tend to play it safe. His debut as both writer and director was 2011’s Margin Call, a horrifying depiction of clinical boardroom cynicism run amok on the eve of the Great Recession, its ensemble cast idly playing God with the world’s money. Two years later, All Is Lost seemed no less dramatic as a taciturn Robert Redford’s nameless mariner faced his own immortality, engulfed by the solitude of the high seas. Chandor is unfazed by boldness.

For all their grand themes, however, both films played out in startling close-up; death and global penury felt terribly immediate. That similar intimacy courses through the veins of Chandor’s A Most Violent Year should not register as surprising, yet this is a story laid over a grander canvas: the feted, nebulous, arguably unattainable American Dream, an aspiration incapable of being caged in the stifling confines of a Wall Street trading firm or the lonely hull of a stricken yacht.

The year in question is 1981. Hardworking immigrant Abel Morales (Oscar Isaac) runs a successful business selling home heating oil in the endless suburbs of the New York City region. Prosperous, married to Jessica Chastain’s beautiful Anna and installed in a finely appointed home, Morales has pulled himself up by his boots straps; he is the living embodiment of the Republican ideal.

The evolution of success in this context is, naturally, the acquisition of even more and when he pumps every last cent into a precarious land deal, Morales risks losing everything for which he has grafted. Those efforts are not helped when the ongoing targeted theft, by persons unknown, of his fuel trucks becomes an expensive problem. Such activities, of course, constitute a mere drop in the ocean during one of the city’s more dangerous periods — a statistical fact reinforced by the radio reports of crime and murder that pepper the background noise of this forbidding, artfully conceived tale.

Chandor’s film is a powerful one, simmering and, in spite of its title and overall tone, remarkably free of actual violence. The little bloodshed that does occur is brief and brutal, though the plot takes precedence over any gratuitous savagery. A overriding sense of impending upheaval manifests itself in everything from the precarious health of Morales’s business to the raft of malpractice indictments handed down by an ambitious assistant DA (a quietly leering David Oyelowo). Threats to his safety and against his family also lurk in the frigid shadows. To his credit, the director excels in weaving these strands into a complex and genuinely fascinating adult drama.

A pair of technically adept, thrillingly kinetic chase scenes serve to underline Chandor’s ability to stage a spectacle but the triumphs form themselves in quieter moments of human interaction. They rest on towering central performances from Isaac and Chastain, two actors on the perpetual rise capable of turning their considerable talents to almost any role.

The latter is bewitching as a man whose slightly shifty air never robs him of his decency. He is, to all intents and purposes, not a crook and there is something hugely admirable about his enduring disdain for the underhand dealings that appear necessary to get ahead. Isaac — also distinguishing himself at present in the Alex Garland-directed sci-fi thriller Ex Machina — has developed into a chameleonic performer, utterly convincing as the steely business tycoon, both serious and upstanding, who cares deeply for his employees’ welfare. Morales’s interactions with sensitive driver Julian (Elyes Gabel), conducted in English at his own insistence, are laced with a paternalistic subtext that will never be elucidated and his considered, discomforting sales technique sits, just, on the right side of hard-selling sleaze.

By his side, the ever outstanding Chastain is all cold civility, a woman of singular focus. Somewhat scornful of her husband’s naive goodness and raised, one is led to believe, in fairly hardbitten surroundings, Anna is an equal and autonomous partner in the Morales enterprise, as willing to cook the books ("standard industry practice," to use her casual parlance) as she is to execute a dying stag by the roadside. Chastain’s role lacks the all-consuming focus of Mya, the obsessive CIA analyst in Kathryn Bigelow's searing Zero Dark Thirty, but in her elegant grip they are both mighty totems of credible female strength.

A Most Violent Year was snubbed in every major category for February’s Academy Awards, a baffling decision given its darkly muscular swagger and cool pedigree. Yet, perhaps it is too difficult to categorise, a crime epic with little discernible villainy, a period piece largely unconcerned with winking and nodding at its dated setting.

The Academy is not necessarily unafraid of the weird or playful — the nomination for Alejandro González Iñárritu’s Birdman represents proof enough. Chandor, however, conjures nothing so arch. His subtleties, his abundance of wintry greys, suggest that this picture is far from the conclusive masterpiece normally lauded by the establishment. It’s their loss.

A version of this article was first published here.
Posted by Matthew Coyle at 18:36