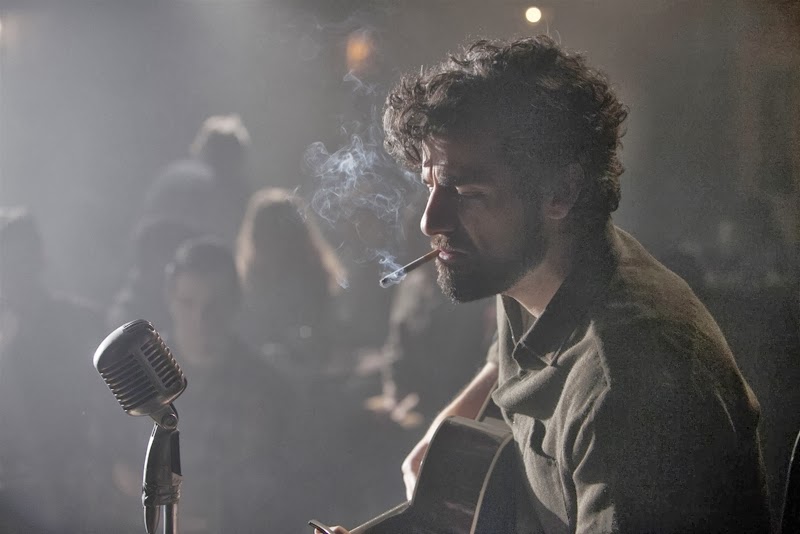 ‘Do you ever think about the future at all?’ asks Carey Mulligan’s acerbic Jean of struggling singer Llewyn Davis (Oscar Issac). ‘You mean like flying cars? Hotels on the moon?’ he replies flippantly.

It is a subtly irreverent moment in the otherwise thoughtful and delicate Inside Llewyn Davis and one which suggests that this down-on-his-luck existence is not entirely separate from a feckless attitude to life’s more serious travails. His meagre solo career never quite reaches the level of depressing but this latest opus from Joel and Ethan Coen is nonetheless a quietly bracing depiction of those on the wrong side of the public appetite.

The year is 1961; the initial setting, Greenwich Village’s dank Gaslight Cafe, a regular venue for the folk scene that so characterised early Sixties New York City. Essentially homeless and reliant on the dwindling goodwill of a small band of friends and acquaintances, Davis is a man at a crossroads. He is scarred by the death of his former recording partner and while their relationship is barely explored, his perpetual motion is no doubt indicative of the lengths to which he will go to avoid serious reflection. Indeed, it is not without symbolism that the beautifully arranged duet playing over the opening minutes is later resurrected by the grieving, lonely survivor. Its form is drastically altered, however; its gentleness is gone. The depth of his loss goes deep.

Davis occupies a nomadic netherworld, inhabiting the Village like a drifting paper bag. Considering the historical period, it is worth imagining the parallel Uptown presence of Mad Men and the similarly lost Don Draper. Both are sadly awkward outsiders, representatives of divergent but iconic eras in the most iconic of cities. Davis’s humble odyssey fits perfectly within the beatnik environs of Lower Manhattan. When the permanently irritated Jean talks of settling down he dismisses it as ‘square’, not a fate he appears to have designs upon. He would rather flit from couch to couch, penniless, than give in to simple existence.

Merely existing would be a step up of course, such is his lowly state. This is not a tale of redemption or personal discovery and it foregoes easy clichés in favour of the stark message that not everyone can make it. Llewyn does not lack talent but life will always produce its also-rans. For every Bob Dylan there is a Llewyn Davis. The audience can’t love everybody.

Accompanied by an orange tabby, which takes on a quasi-totemic significance, Davis meanders through the cold, grey winters of New York and Chicago, perfectly captured by Bruno Delbonnel’s richly evocative cinematography, lacking any semblance of fortune — and a decent coat. Dire straits these may be but Llewyn Davis should not be taken as a wholly depressing experience. It comes infused with a genuine lightness, surprising to even the most ardent of Coen followers.

The brothers are not averse to departing from their familiar idiosyncrasies and in recent years they have turned out pretty conventional fare in the shape of No Country For Old Men and True Grit. Both were adapted from existing sources but still they bore the Coen brand: cleverly layered dialogue, ambitious editing and a discernible tone, just off centre. This latest effort, on the other hand, is essentially an original creation and the directors excel in bringing their own screenplay to life.

Their penchant for quirk is well known but there is no sign of such clutter here. A tenderly elegiac story is afforded room to grow, its characters unburdened by the need to deliver laughs or sell a strange plot contrivance. The Coens are, quite simply, filmmakers at the very pinnacle of their craft and one should be awed by the confidence they display in rowing against their own current, in playing it almost completely straight. They are comfortable enough in their own abilities to pick and choose from their enviable range of artistic tropes.

Indeed, those few nods to their more recognisable habits come and go without fanfare. The ridiculous track on which Davis willingly waives his right to royalties is straight out of the brothers’ back catalogue. So too is John Goodman and Garrett Hedlund’s mysterious double act, Beckettian in its considered obscurity. They are nonsensical but unobtrusive figures. When the dialogue occasionally invokes the directing duo’s earlier material — ‘Where is its scrotum?!’ — it does not linger to wink knowingly at the audience.

As one would expect the cast is superb. In particular, Justin Timberlake’s vocals and boyish innocence are just the right side of bearable given his relatively small role. The look of wounded pride at the questioning of his songwriting ability is brilliantly nuanced and a reminder that for all the dreadful features in which he assumes the lead, his presence in an ensemble piece is rarely wasted.

As the eponymous Davis, it is towards the leading man that many of the plaudits should be aimed. Isaac has been standing out in various projects over recent years, be they blockbusters (Robin Hood, Sucker Punch) or acclaimed dramas (Drive). In the little seen 10 Years, he ably demonstrated his considerable musical talents and as their central player, the Coens entrust him with the task of convincing as both man and artist. He disappoints on neither front.

Isaac’s stony visage and blue collar delivery underscore a steely determination beneath the wistfulness of his music. In the face of each new disappointment, he endures. Whatever his faults and despite his unwillingness to join the real world — where useful prospects actually do exist for him — hard work is not his downfall.

He snaps only once, reminding the well-meaning but naive hosts at a dinner party that his guitar and his songs, far from being the trappings of a ‘performing poodle,’ amount to a livelihood. ‘This is how I pay my rent’ he cries. It is an incredibly raw and unexpected outburst. The Coen formula rarely deals in standalone drama, unseasoned by acceptable hints of weirdness, but it is demanded here. Anything less would be churlish.

The recent Oscar snubs of this fine film should not indicate anything other than the Academy’s predilection for ignoring that which is often right in front of it. In the midst of awards season, cinema audiences should be willing to step inside Llewyn Davis if only to confirm the folly of that oversight.

An edited version of this article was first published here.